BEC » Blog » Survey results: How Brno expats deal with the challenges of the lockdown

On 12 March, it’d been a whole year since the CR declared the 1st state of emergency. For this rather grim anniversary, we asked foreigners living in Brno how they’ve been dealing with the challenges of the past year (and of today).

More than 200 expats from 57 different countries replied to our questionnaire. Most of them spent the past year living and working from Brno, although 10 per cent worked for some time in a different country.

Let’s have a look at the results, and compare your own experience to your peers’:

More than three quarters (77%) of respondents spent the last year working from home, although some (19%) reported still mostly going to their office/place of work.

As for wages, almost half of the respondents’ salary seemed to have stayed stable. Some reported minor changes, and it’s rather positive to see that more foreigners (28%) are still reporting changes to the better, rather than to the worse (13%).

Some foreigners experienced major changes, though – the same percentage (7%) reports big changes of their salary to the better, as to worse. 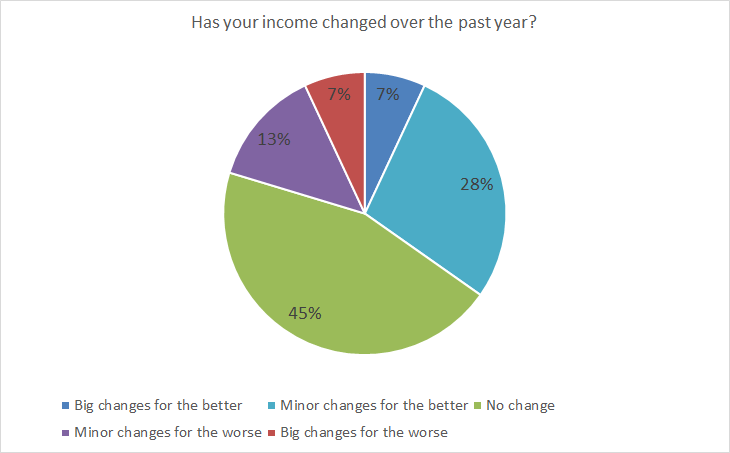 We asked foreigners which types of measures and restrictions pose the highest challenge in their current life in Brno.

Hardly surprisingly, the regulations limiting travelling in and out of the country placed at the top of the list, often described as insufferable, after being imposed for such a long time.

The second place, to our slight surprise, belongs to the restriction of cultural events and entertainment. Only one in five respondents considers the closed theatres, cinemas, museums, concert halls and bars as tolerable. As such, limited culture&entertainment placed higher than closed shops or restaurants.

Some limitations, perhaps in view of the other more severe measures, foreigners tagged as not that much of a problem – only a small percentage found lengthy periods of home office a true bother. Neither had closed gyms or limited access to further education placed anywhere near the top. We certainly don’t want to accuse expats of not caring much for their physical health or career growth. Quite on the contrary, it’s understandable that problems arising from limited opportunities in these areas pale in comparison to feeling completely isolated from your friends and family across almost impenetrable borders.

It was hardly a surprise to see that closed restaurants figured as a worse inconvenience than bars and pubs. Closed cafés were right after restaurants, though, often tagged as more bothersome than closed shops. With Brno famous café culture and the limitations on seeing our friends, many of us dearly miss the opportunity to have a cup of coffee with a book or with good friends outside the four walls of our homes. 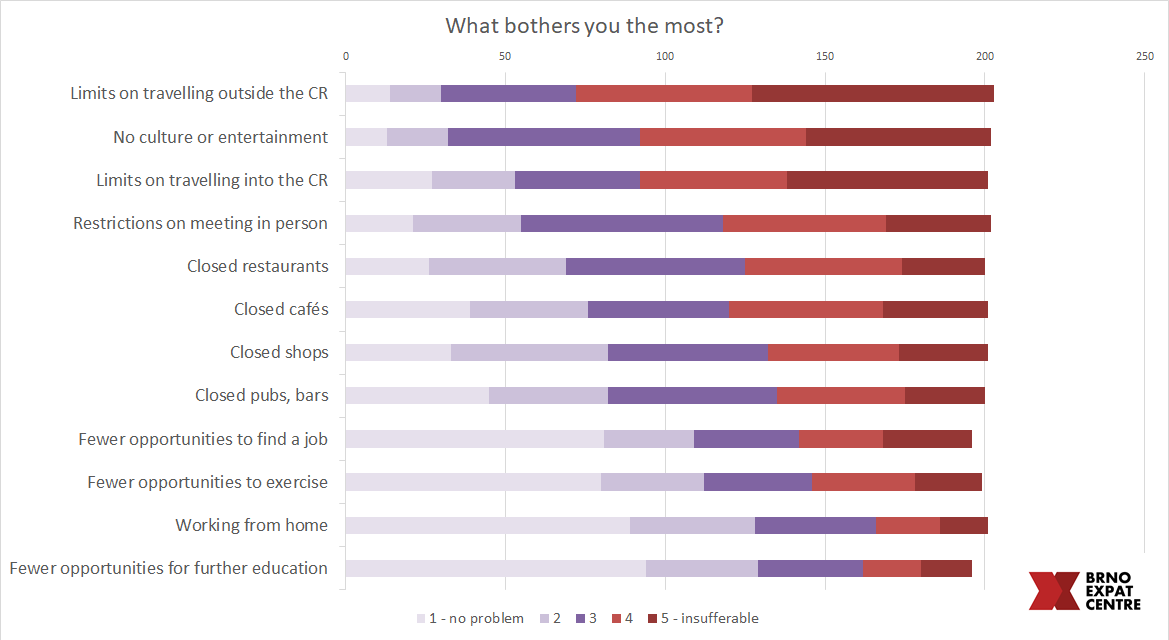 One third of respondents haven’t noticed themselves struggling more than usual. Some (11%) quoted great support in their friends and family as the reason, others (9%) claim they work hard on keeping mentally healthy. Only some (11%) simply consider themselves resilient.

However, two thirds of respondents have noticed themselves experiencing more struggles than normally. 32% are not concerned though, and believe it will pass and they’ll soon get back to normal. 21% are actively working on getting better but 11% seem to be struggling without plans or means to improve their mental health.

If you find yourself to be one of them, we recommend watching our January mental health being webinar, focused on tips for expats on how to take care of ourselves in our everyday life. Markéta, the coach from the video, mentions several techniques and is available online.  Another possibility is to meet with Martina, a Brno-based trained expert from Forest Mind, a programme that teaches you how to get the most tranquillity of your time in nature. She speaks English and takes on new clients.

You can also check our list of medical services for other professionals.

We were glad to see that a vast majority (72%) seemed to find enough information in English. Some respondents (mostly from other Slavic countries) even mentioned they’re following news in Czech. Well done!

For those of you who don’t feel satisfied with your current sources of English information, we prepared an overview in our Guide to the Pandemic – have a look.

Most expats (80%) seem to regularly follow social media for staying up to date, though a large number of respondents go closer to the source, to news channels, TV or radio. The table below shows you the percentage of how many times the sources were mentioned.

To name a few channels, Brno Daily, CT Brno News , Expats.cz, Prague Morning and Radio Prague were mentioned most frequently as the sources foreigners rely on.

Are people reconsidering life in Brno?

Finally, we asked whether the situation made expats consider leaving Brno and moving elsewhere. We are happy to see that a majority (62%) responded with a clear no, although under the circumstances, we very much understand the rest with their more tentative answers. Some mentioned leaving temporarily until things in the CR get better, some are contemplating working from home somewhere else (a different city or country), now that employers allow extended periods of home office. 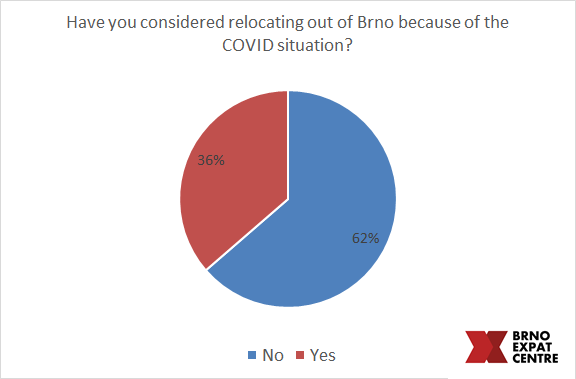 Many respondents expressed deep dissatisfaction with the way the Czech government has handled the situation, especially the unpredictability and lack of transparency/logic of their measures and plans. A sentiment that got repeated throughout several answers is a sadness to see the CR doing so badly when compared to other countries.

Lastly, to quote one respondent and their question: “When will this all end?”

We don’t know, though we’re also looking forward to the time when things get closer to normal. Until then, we’d like to assure you that we’ll continue to be here for you should you have a need for our assistance and support.