After our review last month of the bona fide classic The Cremator, we come to a movie that often splits opinion: Zdeněk Troška bawdy lowbrow comedy Slunce, seno, jahody. The following article is an updated version of the article first published on Czech Film Review.

“What do you think of Slunce, seno, jahody?” I messaged a Czech friend shortly after my first viewing of Troška’s bumpkincore classic.

“Stupid jokes for village people.” Came her rather sniffy answer.

Not that her reply was entirely unexpected – the film has a reputation for being loud, crude and stupid. This is how many young urban Czechs regard those living in rural areas, so while some of my Czech friends remember it warmly, most absolutely recoil at the mere mention of its title.

Make no mistake, Slunce, seno, jahody is extremely loud, crude and stupid. To give an example of the level of humour, one scene features a senile old lady trying to hide a turd from her overbearing daughter. That’s it, that’s the whole joke.

Despite this, the film has a directness that I appreciated, unlike the meandering pace of so many Czech movies I’ve seen so far. It bounces along nicely with goofy energy that I found genuinely endearing.

After a saucy opening scene with a vicar unsuccessfully trying to peep on a young couple having sex in the woods, the story begins in earnest. A handsome young agricultural student, Šimon Plánička (Pavel Kikinčuk), rolls up in the small South Bohemian village of Hoštice to help out the local JZD brigade (JZD is Jednotné zemědělské družstvo, the agricultural collective in the Czechoslovak Socialist Republic).

The village is so small that the train doesn’t even stop there, but thankfully the cute conductress slows it down enough for him to dive off. 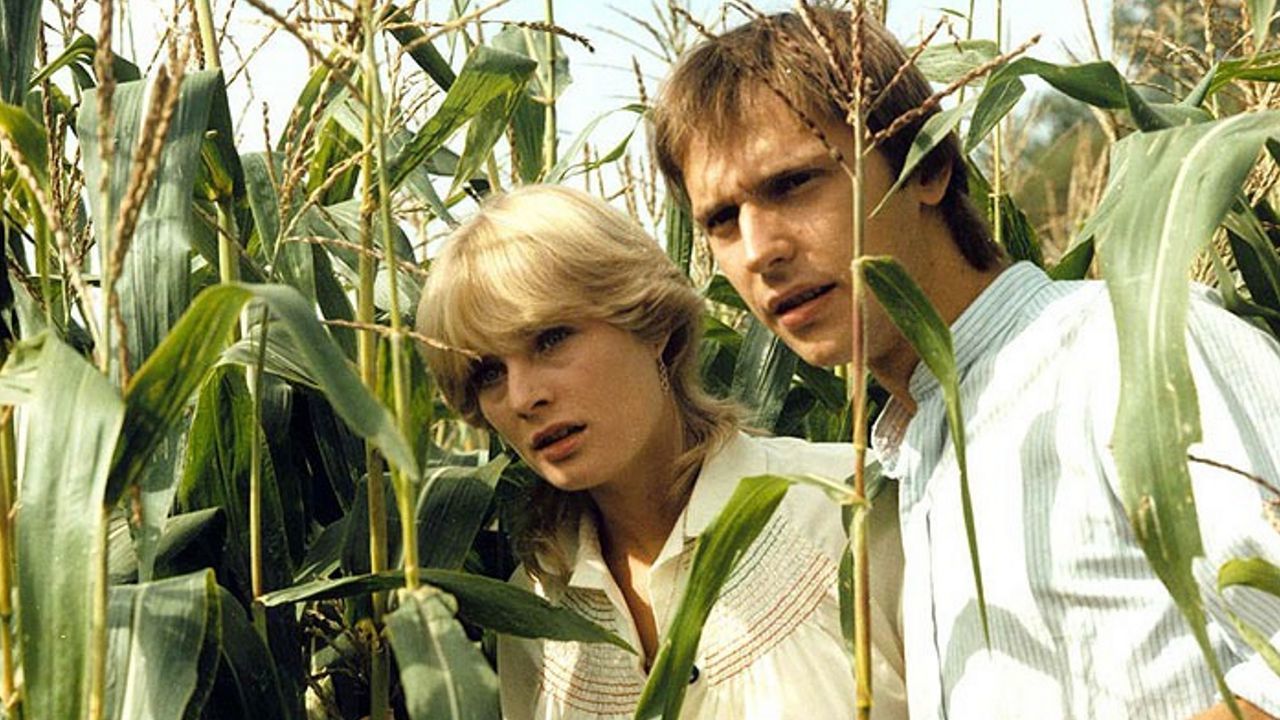 His arrival in the village causes quite a stir, especially among the young women, and his radical ideas for improving the milk production of the local cows – by playing them music – raise a few eyebrows.

He takes lodging with the formidable Mrs Škopková (Helena Růžičková, reminiscent of Hattie Jacques in the Carry On films) and her layabout husband. Šimon also catches the eye of Mrs Škopková’s eldest daughter Blažena (Veronika Kánská), the blonde girl we saw having a spot of nookie with her boyfriend in the opening scene.

The JZD suspect that Šimon might be a spy at first, but soon they embrace his unorthodox methods, which involves a no-expense-spared plan to kit out all the cows with their own personal set of headphones.

That’s the basic set up, and there’s plenty of other bits of business. Some are quirky and amusing, like the friendly local ghost who likes chatting to newcomers before disappearing into thin air, a granny who’s always hoping for a fight to break out, and the village teacher who can’t resist bursting into song. She’s always singing the film’s theme tune, which is a real earworm and appears in various other iterations throughout.

Others are less funny, like the senile grandma – Mrs Škopková’s mum – who gets wheeled out in her bed to the garden each day and left there. She has a love-hate relationship with a chicken, and inevitably the bed ends up rolling away through the village. 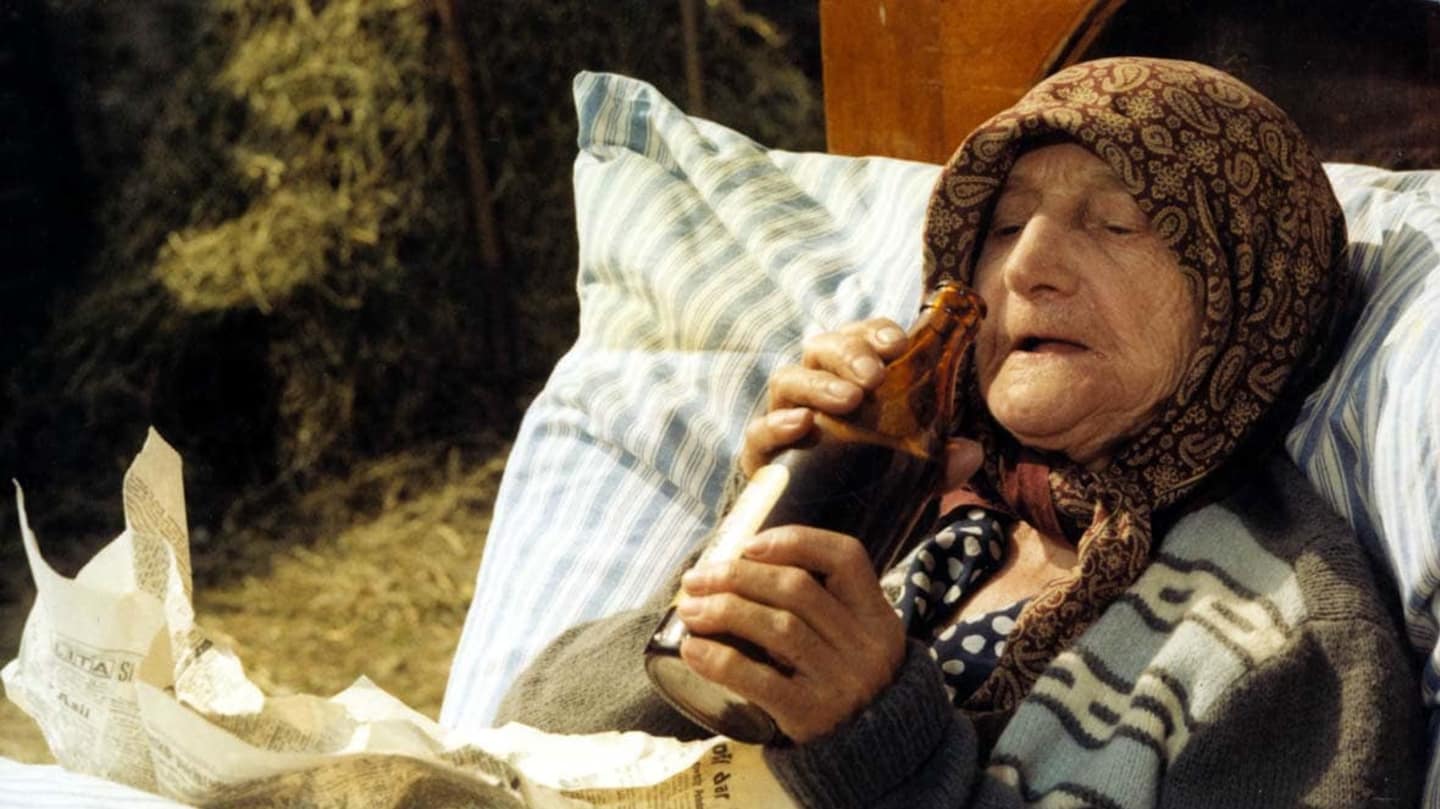 Other jokes are so daft that they went under my head, if that can be a thing. In one such scene, another granny (there are gangs of grannies in this movie) mistakes the moon shining through a small copse of trees for fire and sounds the alarm. The rest of the village, who are attending a dance, all scramble to finish their drinks and rush outside to tackle the blaze, only to realize it’s just the moon. The teacher bursts into song again and they all carry on drinking in the field.

It’s quite a lengthy scene and I thought there must be greater significance, but no. The joke was: an old lady mistook the moon for fire and sounded the alarm, disrupting the village dance.

So Slunce, seno, jahody is extremely dumb, and most of the characters in it are loud and crude. I can see why many of my Czech friends consider it an embarrassment because it doesn’t show their rural compatriots in the most flattering light, unlike the bucolic philosophers of something like Rozmarné léto.

Nevertheless, I appreciated its bluntness after several movies featuring small-town characters wistfully pondering their existence. It also doesn’t dance around the subject it is clumsily satirizing, unlike some of its more illustrious counterparts. It outright takes the piss out of the JZD, and as a result, I ended up learning something about collective farming (admittedly online the next day, not from the film itself.) It was also popular enough to spawn two sequels: Slunce, seno a pár facek (Sun, Hay, and a Slap) and Slunce, seno, erotika (Sun, Hay, Erotica).

Slunce, seno, jahody might not be Noel Coward, but it’s a fun movie that plays well with a few beers and your brain switched to neutral. It’s definitely worth seeing to find out why some of your Czech friends hate it so much, and why others still swear by it!

If you like this article you can enjoy many more at Czech Film Review!