Welcome back to the “At the Movies” blog, where we’ll now take you on a journey through the classic (and not-so-classic) films of Czech cinema. The following article was originally published on my new website, Czech Film Review.

Anthony Perkins as Norman Bates in Psycho. Anthony Hopkins as Hannibal Lecter in The Silence of the Lambs. Christian Bale as Patrick Bateman in American Psycho. Everyone loves a great movie monster, and it’s a tragedy that Rudolf Hrušínský’s incredible performance as Karel Kopfrkingl in The Cremator hasn’t gained the same kind of international notoriety.

He’s just as enjoyably chilling, and, with the film coming from a far darker place than the others, has more important things to say to today’s society.

On the surface, Kopfrkingl is the model professional and devoted family man, married to Lakmé (Vlasta Chramostová) who he met in front of the leopard’s cage at the zoo. They have two children, Zina and Mili, both in their teens. He runs a crematorium and devotes his life to discreetly releasing human souls from their deceased bodies by incinerating them in his furnaces.

He’s obsessed with the process of cremation and fuses his interpretations of Buddhism (learned from his lovely book on Tibet) with his own views on death and reincarnation. Outwardly, he tries to project himself as a man of good taste and scruples, although dark lusts lurk beneath his prissy manner and sanctimonious smile.

The film is set during the 1930s, and one of Kopfrkingl’s old army chums, Mr Reinke (Ilja Prachař), is an engineer with ties to the Nazi party who encourages him to recognize the theoretical drop of German blood flowing in his veins. Initially, Kopfrkingl rejects the idea, maintaining that they’re a good Czech family and only speak Czech at home. But as the threat of German invasion looms over the country, we see that Kopfrkingl is an endlessly malleable hypocrite who is easily swayed into informing on his Jewish friends and colleagues. He readily adjusts his beliefs to suit the prevailing wind, especially when there’s some perceived benefit for him involved. As it turns out, the Nazis have a special project in mind for someone in his particular niche, and he’s ready to embrace his calling … and then some. 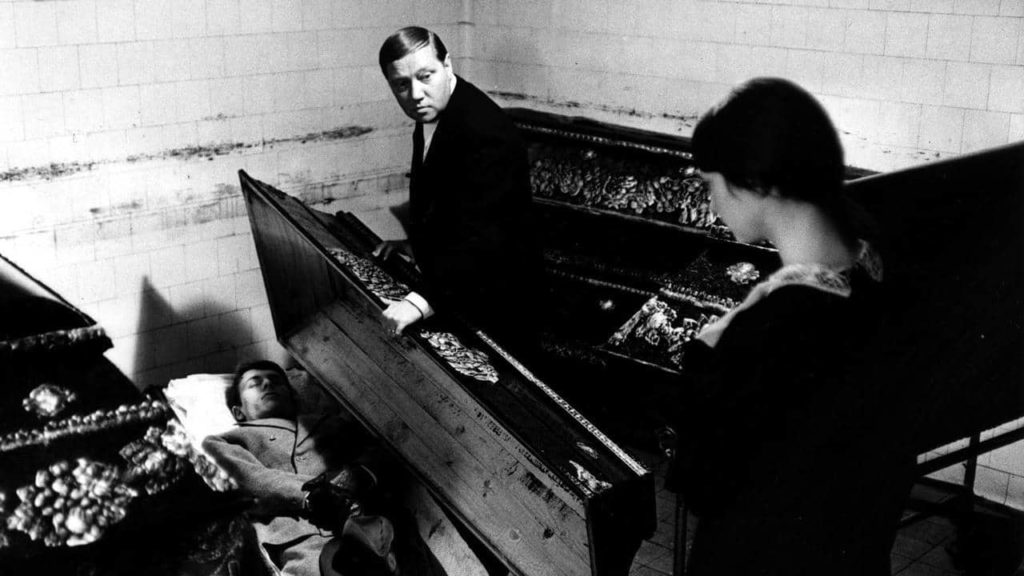 Adapted from Ladislav Fuks’ novel, The Cremator is a rare example of a Czech horror film. Herz creates an intensely disturbing atmosphere through the use of stark black and white photography, tight close-ups on people’s eyes and mouths to create a sense of dreadful intimacy, and bold edits to further discombobulate the viewer. Zdeněk Liška’s ethereal score adds another layer of eeriness.

The subject matter may be grim, but there are two things that make The Cremator one of the most easily re-watchable Czech films I’ve seen to date: Herz’s intuitive direction, and Rudolf Hrušínský as Kopfrkingl.

Some of the film making here is absolutely breathtaking. There are hidden transitions between scenes that made me want to stand up and perform a one-man Mexican Wave … while I was watching it alone in my front room. In one scene, Kopfrkingl is sermonizing at a carnival barker about disease and modern science. While he’s talking he unbuttons his shirt cuff, rolls up his sleeve, and starts flexing his arm. It makes absolutely no sense in the context of the scene he’s in. But then we cut to a close-up of a needle penetrating a vein, and suddenly we’re in the doctor’s office with Kopfrkingl getting a blood test.

Only in hindsight do we realize that he’s warming up for the jab in the previous scene, totally separated by time and space – it has a really astonishing effect. Herz uses several of these transitions through the film, creating a further sense of dislocation. 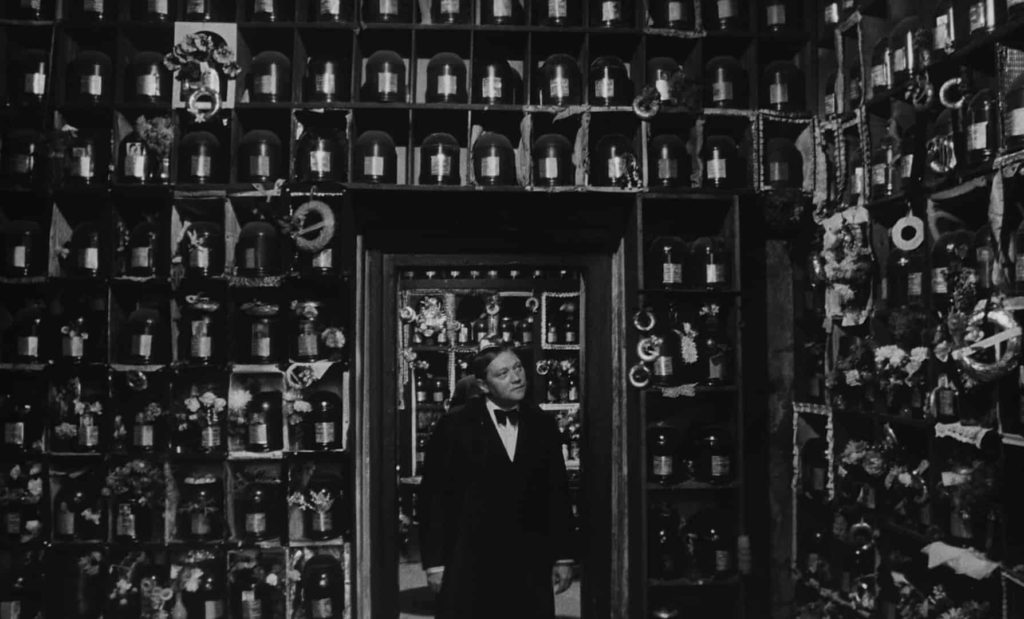 Then you have Hrušínský. It’s early doors in my journey through Czech cinema and he was quickly becoming my favourite Czech actor. His massive performance as Kopfrkingl sealed the deal. He’s incredible here in a fully realized, minutely observed performance, all the way down to Kopfrkingl’s petty eyes and little self-satisfied twitches of the lips; his courtly manner and how he uses his substantial bulk to intimidate people around him; the hand laid calmly yet threateningly on their necks; the way he tenderly combs the hair of the deceased, then subconsciously uses the same comb on his own hair.

When Kopfrkingl finally tips over into violence the most disturbing aspect about it is the complete lack of aggression. “The banality of evil” is a phrase so overused that it has become banal itself, but Kopfrkingl is a perfect example. Once he’s decided on a victim, it’s totally passionless. I was reminded of Passolini’s Salo, or the 120 Days of Sodom where, under the influence of a fascist regime, people become accustomed to performing the most heinous and depraved actions as a matter of course.

It also made me think about Divided We Fall, which showed how difficult it was for decent people to make a stand against the Nazis and do the right thing. The Cremator is the opposite, showing how easy it is for someone to fall under the influence of a pernicious ideology and enthusiastically do its bidding.

Blackly comic, masterfully crafted and extremely disturbing, The Cremator is a Czech horror masterpiece that deserves to be seen by a far wider audience, especially in our current troubled times.

If you liked this article, you can enjoy many more at Czech Film Review!