From subterranean lairs beneath Paris opera houses to the belfries of Notre Dame, it’s a story we’ve heard time and time again. Here’s another version – boy is a giant ape from Skull Island who falls in love with a human girl; girl freaks out because the boy is a giant ape who’s carrying her around like a rag doll. Boy snaps a few dinosaur necks to protect her, and the girl suddenly realises he’s just a big sweetie inside. Girl goes back to New York and the boy is captured, goes on a rampage through the city. Boy finds girl again and drags her to the top of the Empire State Building, where gets shot down by some biplanes. Just in case the viewer missed the influence, the original King Kong concludes with the line: “Oh no, it wasn’t the airplanes. It was beauty killed the beast.”

The format first found widespread popularity in Gabrielle-Suzanne Barbot de Villeneuve’s 1740 fairytale, La Belle et la Bête, although the story itself can be traced to much older myths like Cupid and Psyche in the 2nd Century AD – hence the lyric “Tale as old as time” in the Disney version.

Filmmakers were relatively late in making a movie version of the story, starting with Jean Cocteau’s revered La Belle et la Bête in 1946, widely regarded as the definitive film adaptation of the tale. Then, of course, there was the Disney version, a prized asset in the House of Mouse’s Renaissance in the 90s.

Before and since there have been many other adaptations, including Juraj Herz’s 1978 Panna a Netvor. With Herz, the mastermind behind The Cremator and Morgiana, in charge, it’s safe to say you’re not going to get any singing teapots in this version…

The film opens with a caravan of merchant carriages lost in a bewitched forest in dense fog. It’s a spooky scene, and a montage of unsettling images over the opening credits continues the ominous vibe. Next, we see villagers slaughtering animals in preparation for a feast to celebrate a double wedding of a wealthy merchant’s two older greedy daughters. There is also Julie, his youngest. She’s beautiful, sweet and innocent, although a bit of an airhead – she never seems to catch on when her nasty sisters are openly making fun of her. 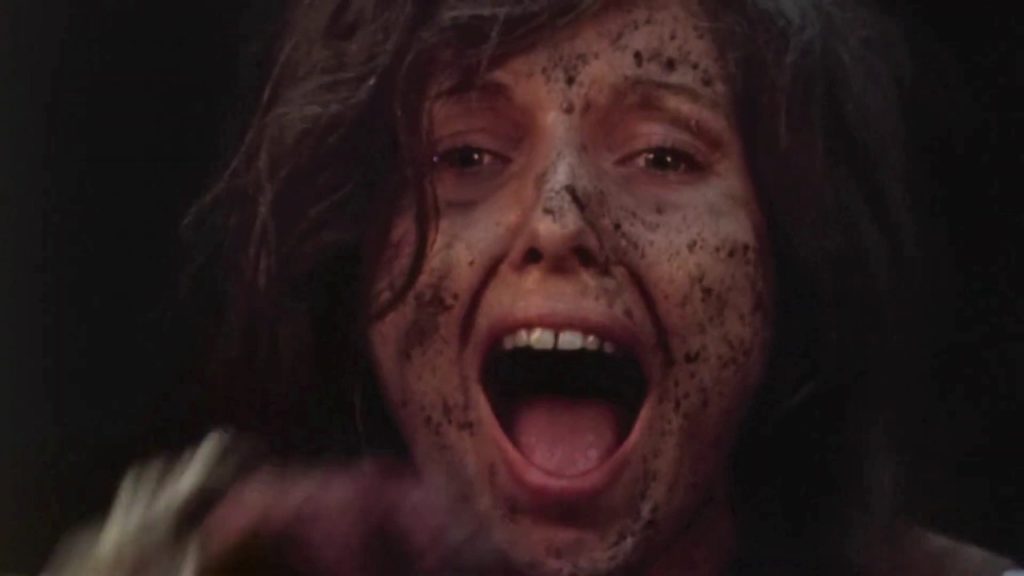 In a scene more like something out of a werewolf movie than a fairytale, the caravan is attacked by an unseen creature and its cargo of gold, jewels and luxurious items are lost, throwing the merchant into poverty.  To raise a bit of cash he decides to sell the portrait of his deceased wife and ill-advisedly sets out through the haunted forest as night is falling.

When the merchant’s horse inexplicably dies, he stumbles upon the tumbledown mansion of the Beast. Although he keeps himself hidden, the beast is a gracious host. His imp-like servants provide the weary traveller with food and drink and, while he sleeps, the Beast takes a liking to the portrait and exchanges it for a stack of gold and jewels.

Thankful and relieved at his good fortune, the Merchant heads out with a sackful of wealth – but pauses to pick a white rose for Julie. This enrages the Beast, who tells the old man that he must die or send one of his daughters in his place.

When he gets home and tells his three daughters the problem, naturally the avaricious older pair couldn’t give a monkey’s about their dear old dad, while loving, selfless Julie is out the door and riding off towards the Beast’s estate before he’s even finished his sentence.

You know the rest. Julie rocks up at the Beast’s mysterious dilapidated mansion. She’s scared at first but he and his Imps provide for her. The Beast is drawn to her beauty and innocence but doesn’t want her to see his face. Over a period of time, a bond grows and Julie begins to fall in love with the Beast’s voice and kind soul. But what will happen when she finally catches a glimpse of his mutant mug?

Herz’s version of this tale is strongest in the dark and violent first half, especially when the merchant and his daughter are exploring the Beast’s crumbling, fog-enshrouded home. It was clearly a magnificent place once but is now accursed and menacing, complete with a bubbling bog in the yard. It’s a magnificent piece of set design, and there’s real suspense in these scenes – Herz has the good sense to keep the Beast in the shadows for a long time, so the tension builds as we wait to see him.

It’s worth the wait. The Beast in this movie is a fascinatingly horrendous creation. While most movie versions go for a bear or wolf-type creature, Herz’s beast has gnarly black talons and a cruel, bird-like head, with insane eyes and a cruel black beak. He lurks around in the shadows of his lair, flapping his tattered wing-like cloak. He’s been driven half-mad by isolation, and also has to deal with an evil little voice in his head goading him to murder Julie and feast on her blood. OK, he looks a little ridiculous riding a horse, but he’s a truly frightening Beast.

Given the gruesomeness of the creature design, Ballet dancer and actor Vlastimil Harapes is an excellent choice to play the Beast. Sure, he’s handsome enough in the dream sequences and at the end, but it’s his control over his body that makes the performance. Even when the Beast is skulking around there is a dynamic, graceful physicality to his movements that hints at the true beauty hidden beneath the monster’s hideous outward appearance.

Zdena Studenková fairs less well as Julie. She fits the part with her glowing beauty, and has the guts to selflessly put herself in the Beast’s hands, but she lacks the vitality and charm that Libuše Šafránková brings to Three Wishes of Cinderella. She seems quite a limited actress and the film really drags in the second half when the pair are tentatively falling in love. The setup – Julie talking to someone she’s not allowed to see – needs a stronger show from the lead actress, and there’s not much going on in her performance.

Another downside is Julie’s dream sequence and the happy end when (spoiler alert!) she’s carried off by her Prince Charming in gauzy soft-focus… it’s more likely to get you reaching for a barf bag than the horror stuff.

Beauty and the Beast is pretty uneven thanks to the miscued romance stuff that piles on ballast when the movie should be taking flight, but there’s still enough here in Herz’s enchantingly dark and violent vision to make it a strong recommendation. Be our guest…