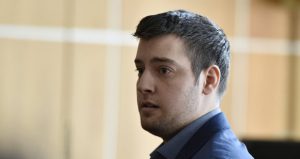 I never knew Kevin Dahlgren, but I have heard and read and talked about him a great deal. He cut a path through the English-speaking community of Brno that I will never forget.

Now, after violently murdering four members of his extended family in cold blood; after a chase that went through Austria, across the Atlantic Ocean and ended in America; after a diplomatic question that reached the top of the United States government; after his extradition to Brno to face trial; and after his chilling words to the court — Kevin Dahlgren hung himself on Jan. 11 with the bedsheets in his prison cell. Kevin Dahlgren is dead.

Brno is a safe city. I have never felt in danger while I have lived here ­— slightly uncomfortable, perhaps, but never have I been unduly worried about walking home late at night or being alone at a tram stop. Factually, murder is exceedingly rare.

Then Kevin Dahlgren came. He is the elephant in the room — or, more to point, the four-time-murderer expat in our city.

I still remember how I heard about the Kevin Dahlgren murders. A student arrived in one of my English classes: “One of you Americans have brought your mass murder to the Czech Republic,” he said. The facts of the quadruple homicide were sketchy for the first few days; as information dribbled out, it seemed clear that there had been little exaggeration to the rumors.

The basic facts are that Kevin Dahlgren came to the Czech Republic to live with his cousin Veronika Harokova, her husband Martin Harok and their two sons, David and Filip, in Brno-Ivanovice north of the city. He taught some English. He went for runs. Many details are online.

Then, something snapped. On May 22, 2013, Kevin Dahlgren stabbed Martin 29 times, then he killed Veronika and then Filip. Later, David returned home from school and was stabbed six times. Kevin Dahlgren tried to burn three of the bodies. At some point, the cleaning woman came and was sent away.

Then Kevin Dahlgren fled. He took a taxi to Vienna and boarded a plane to the United States. Over England, news of the murders finally caught up with him. The pilots were informed. They considered landing, but feared it would unsettle a suspected mass murdered in an enclosed cabin of passengers. Instead, the flight attendants continued as normal. Upon landing in Washington D.C., Kevin Dahlgren was arrested and put in custody.

Everyone wanted to know if I knew Kevin Dahlgren. I did too. Americans tend to find each other in Brno. Was he one of the new people who worked for my large language school? Was he a guy who I met at a pub a few weeks prior? Given that Brno is so small, there were connections, although none directly. A colleague had been schoolmates and longtime friends with Veronika Harokova. A friend was one of the first members of the media at the site.  One student lived near the home where the murders took place. Another student had once seen the male family members’ band play.

Kevin Dahlgren represented the local, less-well-known version of another ex-pat crime that made much bigger headlines throughout the world at about the same time. A British woman, Meredith Kercher, was brutally murdered in 2007 in Perugia, Italy. Her roommate, Amanda Knox, an exchange student from Seattle, was one of the people arrested. Knox spend several years in jail, endured many legal difficulties and was finally definitively acquitted in 2015. I followed the twists and turns in the New York Times.

Then, something in the same general category happened in the small European town where I lived.

The Czech police provided evidence to make their case for Kevin Dahlgren to be extradited to the Czech Republic to stand trial. Blood found on his shorts matched the DNA of the victims.

Reportedly, the U.S. State Department had to make the official decision, on Aug. 31, 2015, Kevin Dahlgren was the first American citizen to be sent to the Czech Republic for a criminal trial.

Kevin Dahlgren was put through psychological tests and the investigation was closed in March 2016. Eventually, he was tried in Brno. He was sentenced to life in prison on July 20, 2016; his appeal was rejected.

During one of his appearances in court, he explained his lifelong fears and spoke of his desire to continue the healing process. Idnes.cz has the chilling video and audio online. Click here to watch it.

“Since my incarceration in America, I have only been healing for three years. It’s been three years of healing but there’s a lot of things I have to live with for the rest of my life. I still have many fears. I have many nightmares. I have a tough time at life and at going on living, but I also have exceptional motivation to become something extraordinary and become someone worth accepting in society.”

I posed for pictures with my mother at the fountain below the World Trade Center on the afternoon of Sept. 10, 2001. When Al-Qaeda terrorists destroyed the Twin Towers the next morning, I was safely in an apartment in mid-town Manhattan. The experience, however, was visceral and influential. I did not know Kevin Dahlgren, yet he represents the second closest I have ever come to mass murder. Both Sept. 11 and his murders in north Brno serve as personal reminders of the world as it sometimes can be.

I like writing this blog because living in this city has taught me many things about this country, about my home country, about other people, and about myself. I would be remiss to pretend that I have not also learned, through Brno, about another angle on horror.