BEC » Blog » Returning to the original career plan through Brno

When I was a kid I wanted to be a professional baseball player with the Chicago White Sox. Unfortunately, I couldn’t throw, couldn’t hit and couldn’t field, so my baseball career stalled before it could get started.

Suffice it to say, always have a Plan B. By the time I left for college I had figured out a way to keep the baseball dream alive: sports journalism.

Now, when I look back over a professional career that includes 13 years in America and 13 years in the Czech Republic, I must admit that Plan B did not pan out and I am more accurately on Plan D or Plan E.

I think that this is probably pretty representative for local expats. Brno, while a great city, was probably not where any of us predicted we would be living when we were daydreaming during the boring parts of math classes. Most of us would probably have had trouble pointing to the Czech Republic on a map because we were also spacing out during geography lessons.

I always looked to advance in position and salary, and I left two companies before they went bankrupt a few months later. In the end, after a circuitous route, I landed in Brno, teaching English and writing about software ­— and not working for a daily newspaper and not watching Major League Baseball games from a press box.

The good news is that Brno is a generous city.

So, how does a career plan go astray? Yours may have been slow and steady. In my case, slowly, then quickly.

My first piece of published writing was when I was in high school. It was a 50-word Letter to the Editor about an annoying traffic light that stayed red for too long in the middle of the night when there were no other cars around. Very important stuff. Nevertheless, when I saw my name in the newspaper (four years before I had an email address and used the internet for the first time) I felt a jolt of pride that, I felt, had established my life course.

In college, I wrote for the school paper and had a part-time job with The News Tribune of Tacoma, Wash., an actual daily newspaper. The first year consisted of taking phone calls from high school coaches to get scores and statistics and as many names into the paper as possible. Eventually, I got to cover the games. I have many stories about how God helped a pimple-faced teenager’s winning kick through the goal posts and how I thought I could make it back to the office in time to write my story before deadline, got slowed in traffic and somehow pounded out 15 publishable paragraphs about a regional swim meet.

A month before I graduated from college, I decided to take a full-time journalist position for a small newspaper. I figured experience would trump more part-timing at the bigger newspaper. That may have been the first miss-step.

Then, it all came crashing down. The small newspaper was clearly in dire straits, university had been expensive and I needed to move on. Then a friend called: a new horse track needed a writer to work in the publicity office. Publicity was the other side of the journalism spectrum but it was still in the press box.

I asked a longtime journalist for advice. He said: Don’t stay in horse racing for more than a year.

I stayed for ten. 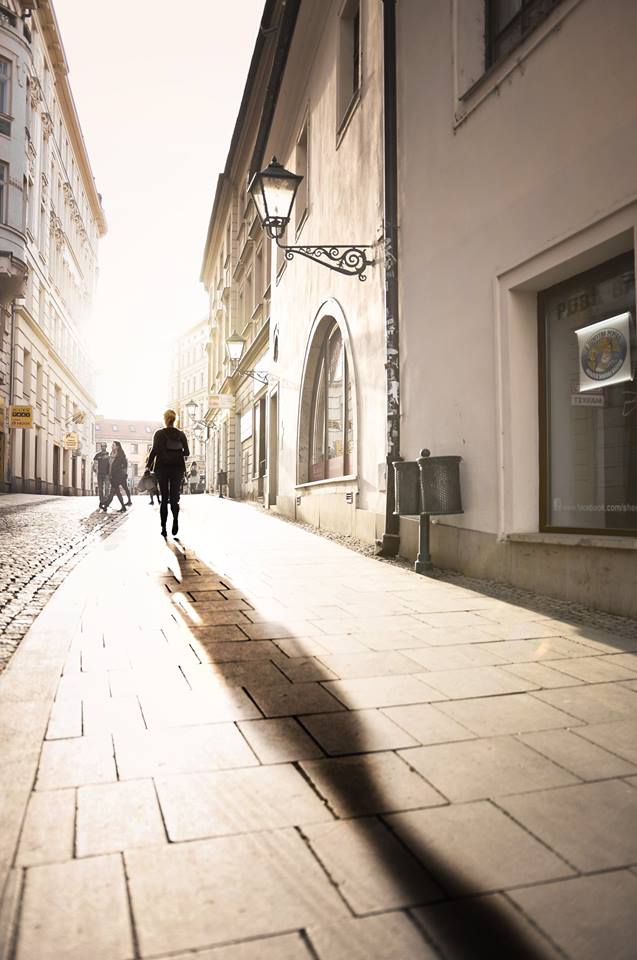 Then I moved to Brno and I put a literal ocean — and a different language — between myself and regularly publishing stories for a living.

Yet, with enough patience and a little bit of luck, things have a tendency to work out. Through Brno, opportunities came. This month, in fact, is the anniversary for two different ongoing writing projects.

First, the Brno Expats Centre. This post is the start of the fifth year of the Through Brno blog. I have written 43 (mostly) monthly posts to explore many aspects of life in Brno. Some have struck a chord and touched readers. Many have provided feedback about how my words have had a positive effect on their expat lives. I look forward to providing many more stories of how we can live fuller lives through Brno.

More recently, BrnoDaily.com was established. It is an actual online English-language daily newspaper that publishes meaningful stories, continues to grow and is embedding itself into this community. It has allowed me to tap into that original career plan through the weekly Brno Sports Report, which, through the middle of this month, has been published on 103 of the past 104 Wednesdays. More recently I started to branch out with a weekly column named Bruno in Brno: “Br(u)no”.

Many of my college classmates stayed on with the daily newspaper and eventually moved up to realize their journalism dreams by covering the Seattle Mariners, the Seattle Seahawks and the University of Washington.

That used to burn me up. Not anymore.

If I’m honest, regularly publishing stories, even if it is for a small audience of expats and English-speaking Brnoans, still inspires that same jolt of pride that I felt so many years ago when I complained about a traffic light. That first byline actually did establish my life course.

What was your original career plan? Is living and working in Brno your Plan B, Plan C or Plan G? Have you been able to realize a previous dream through Brno?