BEC » Blog » What happens when you donate blood in Brno?

The incurious thing that happens when you donate blood (or plasma) is that you feel a bit like a hero. Some donation centers appeal to this sentiment by acknowledging your so-called heroism with a badge of honor – a pin you can proudly wear on your backpack. 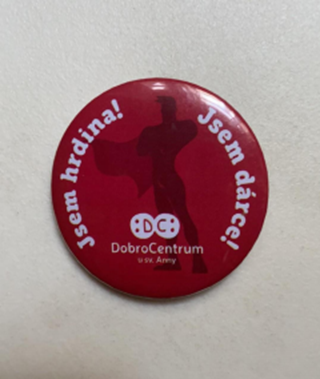 However, that hasn’t really been the case for me, to be honest. Not only because, instead of the honorary badge, I got 500 CZK in cash and a coffee from their vending machine. But mostly because of all the anxiety and hypochondria I was experiencing at the time, which might have made me ask way too many questions to the nurse and the staff in general. Don’t get me wrong, the staff equally bombarded me with questions – some of them, I would infer, simply to test my level of Czech.

Though there are some ground rules, like avoiding fatty meals one day before donating and clear requirements to drink plenty of liquids, I didn’t expect that the staff would be so specific. They basically asked me exactly how much water I had drunk the day before and what I had had for dinner the day before and breakfast that morning.

And, indeed, they were openly concerned as to whether my Czech was good enough to partake

in this experience. Now, the hypochondriac in me was feeling a bit of relief at the thought that my intention to donate would be denied. But the more rational part of me was rather upset that, after drinking so many liquids for the preceding 24 hours, all I got out of it was frequent visits to the toilet. So I had to stand my ground and claim my language capabilities. I have to admit, I did refer to the Ukrainian friend who came along as my human dictionary in case I got lost in translation. And, also, I could see how he was much more believable as a Czech language speaker than I was.

Expect a thorough interrogation. For your own good.

Despite the inconvenience, I must also understand their insistence on the donors speaking Czech well.

I spent, estimated, the first hour just filling out probably one of the longest forms I have ever filled out in my life. And even if the answer was always requested in the form of a ‘’yes or no’’, it was important that you understood each question and answered correctly – or at least I tried taking it that seriously. Or, so I thought, until I had a one-on-one consultation before the donation with their onsite doctor, who went over the filled-out form with me and we together discovered that actually, I had not filled it out as accurately as I had thought.

For example, an X-ray I had at the dentist earlier this year completely slipped my mind, but easily revealed itself in the nervousness of the consultation. Or the marijuana I had last month (recreationally) also didn’t seem deemed enough for me to tick the ‘’Have you taken any drugs?’’ section of the form, until – again – it came up casually during the consultation and the doctor didn’t hesitate to correct the form and make me approve the correction with my signature.

Ok, perhaps the conclusion here is that I am not as badass as some of you folks out there, to overlook such information and keep it to myself, but please bear with me – I am trying here to cover the grounds for even the fainthearted.

Another thing I would point out, now in the midst of COVID and the-over-16 vaccination registration, is that whether you have been vaccinated or not is rather relevant information prior to donating. While I cannot guarantee that it might prevent you from donating (because my answer was ‘’no, I have not been vaccinated against COVID’’), you might want to keep this in mind if you intend to donate. (Some useful information here)

Go where they speak English, or take a friend who’ll translate

Then, I would also advise you to take a friend along, who presumably is also eligible to donate. Not only that they could help you with the language barrier, if there is any, but you can also foolishly take pictures of each other during the procedure, which always makes for precious memories. 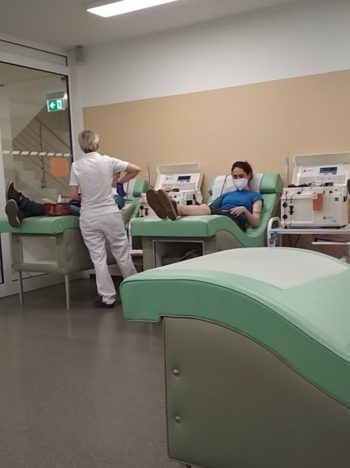 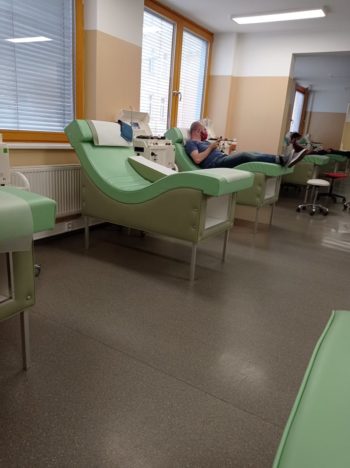 Either way, BEC recommends donating blood at the University Hospital in Bohunice, as they not only have their information and the questionnaire in English, but also English-speaking staff

At the University Hospital in Bohunice

It could go smoothly. Or not

Being that it was the first time for me to donate, I was taken by surprise to find out that no, I cannot read or be on my phone for the entirety of the procedure, though I was warmly advised to have a book with me.

Instead, I learned that I don’t have the best veins to draw blood. So instead of catching up on my reading or on my social media feeds, I spent most of the 50 minutes doing what the nurse referred to as ‘’mačkat’’ – meaning, I kept squeezing the little rubber-like ball in my hand to encourage blood flow, pretty much every other minute or so. This made the overall experience quite anxiety-inducing and also rather annoying.

I should also mention that what I donated was plasma, not blood. And while I do not know enough about this topic (I’m only sharing my own humble experience here), I understand that the length of time for the procedure can differ based on whether you donate blood or plasma, as well as your body weight.

Still, I advise you to do your own research and to decide where you wish to donate – at a blood plasma donor center (known as “Dárcovské centrum krevní plazmy”) or at one of the local hospitals.

It’s enough to google “donate plasma brno” or “donate blood brno” and Google will provide the options, plus a few more pages of useful information for foreigners wishing to donate. With some of these donation centers you get an instant financial compensation (on average 700 CZK) and other perks, such as the option to participate in a raffle with prizes (yes, the center I donated for is organizing a raffle for its donors, offering electric bikes and various gift vouchers), others can offer you a discount for your next year’s taxes.

But either way, it was all worth it

Perhaps, neither one of these reasons are incentivising enough and I understand – I’m not sure I was incentivised by my 500 CZK in cash and the raffle ticket. But the experience in itself can be rewarding, once you mindfully step outside out of our own bubble and put things into perspective.

While I do not have data on the ratio of blood donors to those in need of blood, I’m inclined to believe that there is a constant need for donors, be it for blood or plasma. Then, while going over my health and overall physical condition, I realized that for most of my life I have been an eligible donor and I will hopefully still be one for the many years to come. But there was also a feeling of sadness that I had waited for almost 33 years to try it.

In the end, if I have not pitched this enough for you by now, I will say that I also appreciated how the rigorous “interrogation” prior to the donation brought some awareness about the guidelines on how to keep tabs on my health status.

A few months ago I was sharing about my experience of having lost and found my ID in Brno. I mention the article not just as a clickbait, but because I realize that, without my ID, I wouldn’t have been able to register for plasma donation, which now has provided the material for this article.