This article was written in cooperation with Marek Viktor, real estate consultant from relp.cz

Energy prices are skyrocketing now, which poses a question to both landlords and their tenants. This article should give you a basic understanding of what can happen to your lease contract, the why and how, and finally, what your rights and options are in solving these situations.

Let’s not now ponder who and exactly is behind the rising prices – whether Russia, the USA, the EU, the Czech government, the German Stock Exchange, or perhaps the Mars-Venus anti-Earth alliance are to blame. For this article, we only must agree on the fact that energy prices have risen significantly. All types – electricity, gas, as well as solid fuels such as coal or wood. And this price increase has to be reflected somewhere and someone has to pay for it – and that someone is the one who consumes the energy.

The vast majority of energy suppliers to your household in the Czech Republic operate on the principle of pre-paid advances. (Unlike for example in England, where you prepay, and can only consume what you’ve paid for in advance.) In the CR, during the year you pay regular advances/deposits to the supplier. At the end of the year, the sum of your paid advances is compared to your actual consumption. This will result in a) an overpayment (more was paid on the advances than was consumed) and the energy provider will refund you the extra paid. Or b) unpaid balance (less was paid on the advances than the actual consumption) and you then have to settle the difference.

If the supplier believes that, thanks to the new prices, the advances won’t cover your total consumption and you will incur large arrears, they will propose a boost to your advances. Or better said, they will increase the advance payments and just notify the customer of the new monthly amounts.

What happens next is determined by which position you stand in relation to the energy supplier:

You have a contract directly with the energy supplier

Then your relationship is direct and you won’t be able to do much with the boost in advance payments from the supplier. You can try to change the supplier, but that might likely turn out rather harmful to you in the end. There’s no other advice to give you than to try saving energy so that at the end of the year there is an overpayment.

The government will introduce a price ceiling from January 2023. More about that later.

Your payment for energies is included in your lease agreement

Then it depends on what you have agreed in the agreement:

1] You only have an agreed fixed monthly rent payment, including all utilities. Then you win if you are lessee (!) – all increased costs in this case are borne by the landlord, and the only change can be made by mutual agreement, which you may or may not agree to! And if you do not agree, the higher cost will be carried by the landlord until the end of the contract.

We will cover this variant in more detail in the rest of the article: 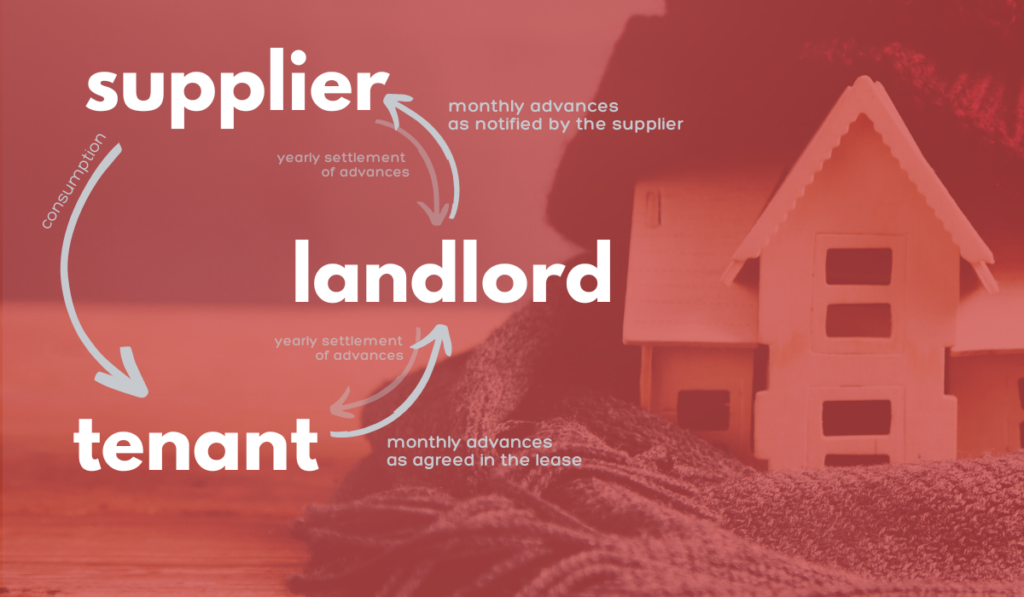 As I explained earlier, these are advances from the suppliers, which will be summed up at the end of the year and compared to your actual consumption. And if according to the lease contract you have agreed on advances for utilities with the owner, their boost works the same way as if you’ve had a contract directly with the supplier. In other words, the landlord can also increase your advances. The landlord doesn’t need to do so, and neither do they need to boost your advances to the same degree as the energy supplier has. The landlord can propose to raise the advances either less or more than the boost the supplier has notified them of.

However, you don’t have to agree with the changes to your payments. Your lease contract is an agreement that can be changed only by further agreement of both of its parties. You can condition your consent on anything – you can first ask to see the announced boost from the suppliers, or see the previous billing, the contract with suppliers.

However, it’s extremely important to understand what happens next. We provide an example:

The supplier increased the price of electricity from CZK 3/kW to CZK 9/kW – while household consumption was 4,000 kW in the previous year. In view of this, the supplier boosted the customer’s monthly deposits from the original 1,000 CZK to 3,200 CZK per month. In the lease contract, the electricity advances were set to 1,000 CZK. The landlord sent to the tenant a proposed boost in the monthly advances to 3,200 CZK. But the tenant did not agree to it, so he/she continues to pay only 1,000 CZK, according to the existing contract.

And what happens at the end of the year?

He can demand this refund in several ways, depending on what’s stated in their contract. For example, he has the right to deduct this amount from the security deposit, or to enforce it in court, if the tenant doesn’t pay willingly.

Each customer has a different contract with energy suppliers, different price conditions, fixation, and billing. Likewise, the government’s price ceiling will be different for each landlord! For some(most), it will be in full – someone has a contract for several rental apartments, their family house, etc., and there, in turn, the government’s contribution to utilities, etc., will not be reflected at all for the tenant.

However, the government’s price ceiling will apply in the vast majority of cases; automatically (without applying) and will affect energy prices from 1 January 2023.

Let’s go back to our previous case study. The price ceiling sets the maximum electricity rate at 6 CZK for 1 kWh. If we apply that to our calculation, the yearly consumption of 4,000kW, previously for 36,000 CZK, would thanks to the price ceiling newly cost only 24,200 CZK (if the price ceiling would apply throughout the whole year). The supplier would thus refund 14,200 to the landlord, and the landlord could not demand the whole 24,000 CZK from the tenant, but only 12,200 CZK.

Price ceiling or not, the mechanism is the same. It is up to the tenant to agree or disagree with the boost to monthly deposits – no matter what the landlord suggests. However, always keep in mind that you’re only deciding when you’re going to pay for the increased price of energy – whether monthly, in smaller installments, or in one bulk after you’ve received your total yearly consumption. Ultimately, whichever timeline you choose, you’ll have to pay for your actual consumption. 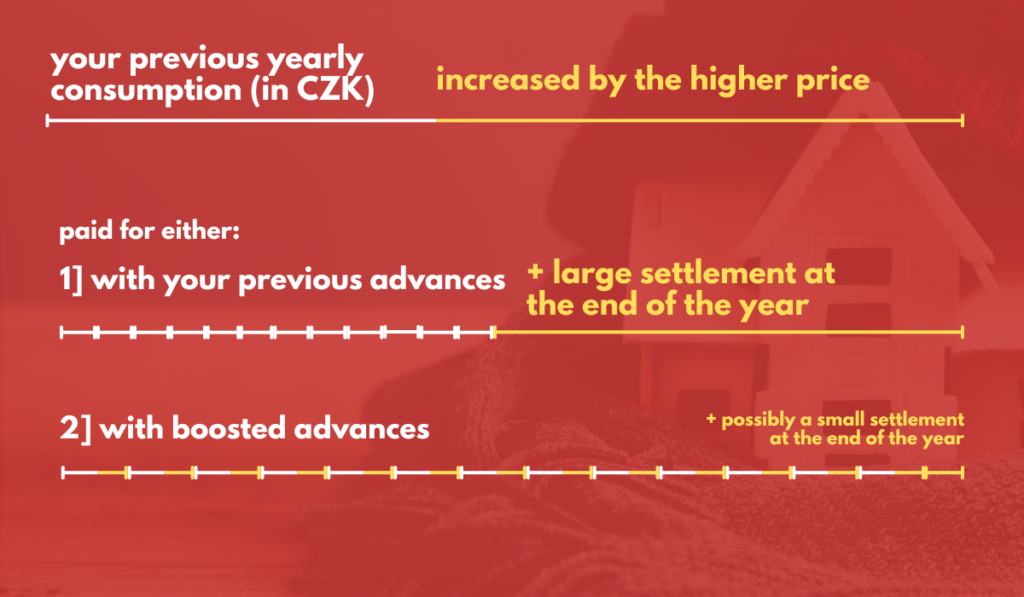 Lastly, please keep in mind that our case study is rather optimistic – some prices, e.g. for heat supplies, are currently growing at an even steeper rate, whilst others don’t rise at all.

That’s why now, when signing a new lease agreement, we recommend you examine the existing contracts between the landlord and the energy suppliers. Previously, this step wasn’t often necessary, because energy prices were more or less stable. However, things have changed a lot in the past two years, and the landlord’s contract with suppliers can have a big impact on your total monthly payments.

For example, when examing a supplier’s contract, you can reasonably deduce the risks of your energy advances growing by some 5 to 10,000 CZK a month in the next quarter. If those risks prove quite high, it might affect your decision to rent or not to rent this particular flat.

If you plan to live in your new apartment for longer (at least 3 years), it might be advisable to conclude contracts with your energy suppliers directly. For shorter-term rentals, though, new contracts with suppliers are probably not worth the effort, so we would once again recommend carefully checking the existing contracts your landlord holds.

The government introduced a financial aid programme. Our consultants explained it here. Have a look to find out if you’re eligible for some housing benefits.

Photos courtesy of canva.com. Written in cooperation with