I once knew an indestructible drunk who had a natural talent for causing mischief, then watching the mayhem unfold with a look of cherubic innocence on his face. I shared a grotty Barrandov flat with him for a while. The place was pretty dismal so we spent most of our waking hours in the pub, where I often ended up scrambling to unravel his mess while he sat there with his eyes spinning in opposite directions, chuckling to himself.

It was around this time that I first tried reading The Good Soldier Švejk. There was a remarkable facial similarity between my chaotic flatmate and the novel’s author, Jaroslav Hašek, himself a noted pub denizen, who in turn looked a little like the bottle-nosed character in Josef Lada’s famous illustrations from the book. Over time I conflated the three, so now years later I feel like I once lived with the good soldier himself.

It has taken me almost one hundred posts on Czech Film Review to pluck up the courage to write something about Karel Steklý’s 1956 adaptation, perhaps the most well-known film version of the novel. It’s a daunting task – Švejk is a cultural icon in his home country and one of the most successful Czech exports, with Hašek’s novel translated into over 50 languages. There are dozens – if not hundreds – of beer halls and restaurants across the country bearing his name, and his image is common from the gift shops of Prague to the farmer’s pub in the small Moravian village where I recently moved. The word “Švejk” has also become a catch-all for willfully incompetent, subversive behaviour, commonly linked with the type of passive resistance that the Czechs have relied on to endure the numerous wars and foreign occupations of the last few centuries.

The film starts with a cold open: Sarajevo 1914, where Archduke Franz Ferdinand and his wife are unceremoniously gunned down in the street by an assassin. As you probably heard in history class, the killing triggers a chain of events that leads to World War I.

500 miles away in Prague, a scandalized charwoman breaks the news to our protagonist Josef Švejk (Rudolf Hrušínský), a dog breeder and pub philosopher, who is initially confused about which Ferdinand she means – is it the guy from the pharmacy who once accidentally drank a bottle of hair oil?

Once he is clued up on events in Sarajevo, Švejk’s wanderings take him to his local pub, where he gets arrested by undercover policeman Bretschneider (Frantisek Filipovský) for making idle and disrespectful small talk about the situation. The landlord also gets banged up for letting flies crap on a painting of the Austrian Emperor Franz Joseph I. 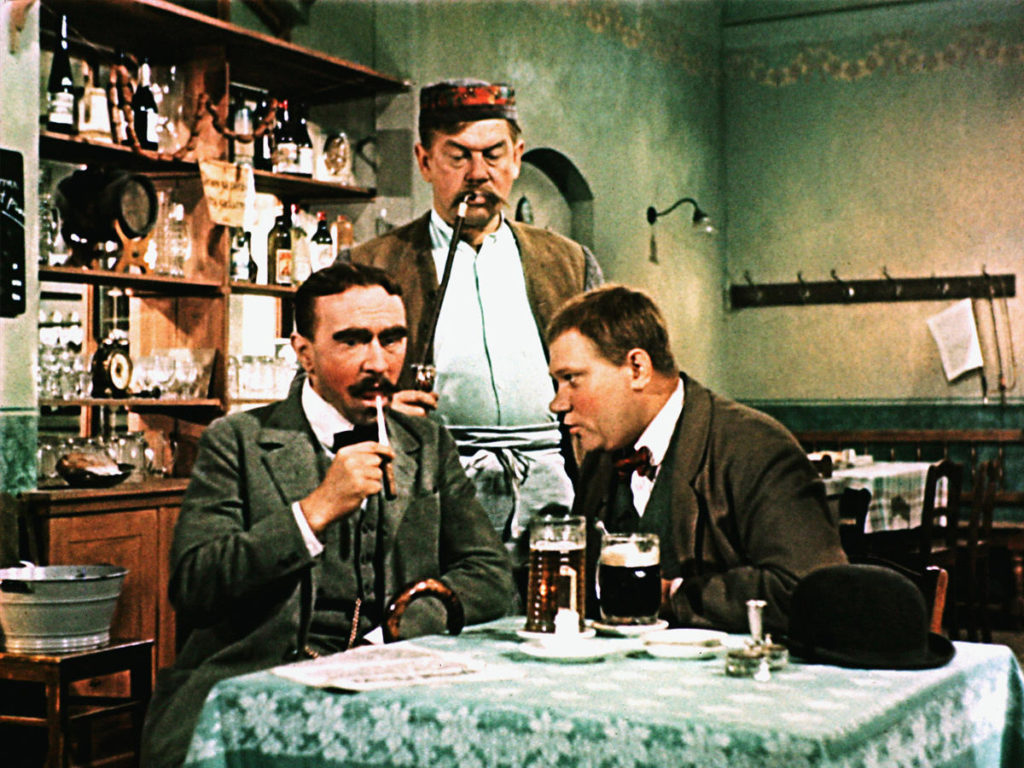 From then on, Švejk’s adventures take him from prison to psychiatric ward to employment as a batman for a drunken army chaplain, who subsequently loses him in a game of cards to a kindly Lieutenant. All the while he swears (or feigns) blind obedience to the Emperor, and the authorities attempt to figure out whether his antics are the behaviour of a moron or a crafty malingerer.

Švejk’s complete compliance makes it difficult for anyone to pin him down to anything, as he cheerfully admits to any accusation thrown at him. He always has a follow-up bit of absurd reasoning that seems to get him off the hook. After a medical examiner declares him an imbecile, he is arrested again for agitating a crowd, then follows orders to report for the army draft by showing up with a wheelchair and crutches.

Joseph Heller claimed that he would never have written his famous anti-war satire Catch-22 without the influence of Švejk, and it is interesting to consider the two protagonists. Heller’s Yossarian is a regular guy determined to live forever or die in the attempt, but is constantly thwarted in his schemes to avoid flying deadly missions by the fiendish logic of the titular Catch; Hašek’s Švejk, by contrast, displays nothing but utter obedience, which somehow helps him swerve the blustering plans of the authorities.

I understand there is some ambivalence about whether Švejk is truly an idiot or a clever conniver playing the fool. I haven’t seen other film versions but to me, it is clear that he – or at least this iteration of him – knows exactly what he is playing at. 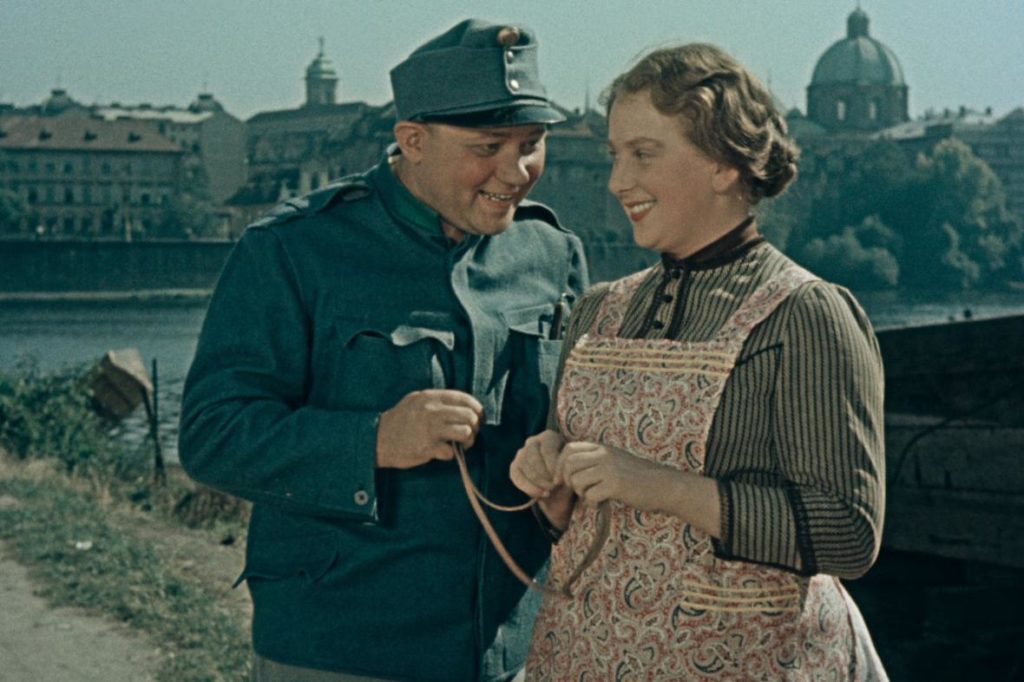 He has a garrulousness still common among the regulars of many Czech boozers and can talk circles around every character he encounters, baffling them with his wordplay and fanciful logic. With Hrušínský’s natural intelligence as an actor, there is a slyness about him. On more than one occasion I was reminded of Verbal Kint in The Usual Suspects, another loquacious little man spinning tall tales to bamboozle an authority figure who totally underestimates him.

The Good Soldier Švejk stays quite faithful to its rambling source material, with whole chunks of dialogue lifted almost verbatim from its pages (as far as I could tell). It is a loosely connected series of comic scenes, as Švejk bewilders and frustrates another character before moving onto the next. Although it is talky and meandering, it is still an enjoyable watch thanks to the colourful production design that instantly captures the spirit of Josef Lada’s illustrations, as inseparable from Švejk as Tenniel’s wood engravings for Alice in Wonderland. Hrušínský, already a screen veteran of 20 years when he starred in the role, is a joy as always, fully embodying the character and dominating the entire film.

What can we take away from a 65-year-old film based on a 100-year-old novel? It seems that anti-war stuff doesn’t date all that much, because while the belligerents and the technology and the military theatres may change, the attitudes of the people in charge stay pretty much the same. So as long as there is conflict and strife, there will always be a place for the Švejks and the Yossarians of the world.

This review was originally published on my site, Czech Film Review.