According to a survey conducted in the late 2000s, married Czechs are almost twice as likely to have an affair than their counterparts in the USA. A large number of those interviewed also believe that extramarital dalliances are just the natural way of things.

The Czech Republic is a comparatively atheistic nation, which may be a contributory factor – many Czechs don’t have the moralistic religious angle to keep them on the straight and narrow. This permissive attitude is reflected in Czech movies, where philandering husbands and cheating wives are often portrayed unapologetically, without the finger-wagging subtexts that often haunt affairs in the mainstream cinema of English-speaking countries.

One such adulterous protagonist can be found in Ladislav Smoljak’s Waiter, Scarper! Josef Abrhám plays Dalibor Vrána, a hapless bookshop manager who is pushing forty, on his third marriage, and totally skint thanks to alimony payments. Vrána’s problem is that he is simply incapable of keeping it in his pants when confronted with a member of the opposite sex. He is so incorrigible that when it comes to choosing a new female assistant to replace the one he got pregnant, he picks the homeliest girl available to reduce the risk of pouncing on her.

His feelings of failure get worse when he attends a school reunion. Several of his old school pals are doing very nicely for themselves indeed, living in spacious villas and taking luxury holidays. Meanwhile, he is driving a battered old three-wheeled Velorex and has to wear a tuxedo to the event – his only item of smart clothing.

His choice of attire soon offers him an unexpected solution to his financial woes. After a drunk in a bar mistakes him for a waiter, Vrána hatches a plan. He starts sneaking into bars and restaurants all over Prague wearing his tux, settling up bills for diners when their real waiters are tied up elsewhere.

Thanks to this ruse, Vrána starts raking in the cash. Soon he can replace his ridiculous old car with a shiny new Skoda, but his behaviour makes his wife Helenka (real-life spouse Libuše Šafránková) even more suspicious than usual. To make matters worse, the police are investigating the case of the phantom waiter, and he must resort to a variety of disguises to continue with the scam.

Waiter, Scarper! was penned by Zdeněk Svěrák and directed by his friend and regular collaborator Smoljak, who he formed a comedy writing trio with Jiří Šebánek in the 60s. Together they created the legendary character Jára Cimrman, who was voted by the public as The Greatest Czech in 2005, only to get disqualified for being fictional. The screenwriter also has an amusing role as Vrána’s well-meaning but gullible neighbour.

Now I know that many Czechs absolutely love the works of Svěrák and Smoljak, but I don’t get it. It’s not a nice thing to say, because it hurts my critical pretensions to admit that something is lost on me. I’ve seen some really funny Czech comedies recently with Tomorrow I’ll Wake Up and Scald Myself with Tea and One Hand Can’t Clap, but Waiter, Scarper! barely raised a smile for me. We get 85 minutes of mildly chucklesome sex farce Vrána tries to keep his grift going while also lusting after a variety of beautiful women, who all go instantly weak-at-the-knees for his flustered charms.

There are several amusing set pieces and a running gag about his car needing a push start every time, and a chase scene involving about a hundred angry waiters. Overall though, it’s pretty weak stuff and never really developed the central conceit to anything more than vaguely diverting. The script was originally offered to Jiří Menzel, who turned it down because he thought the material was too thin for a feature-length film. That’s really saying something because Menzel’s movies weren’t exactly plot-heavy.

Abrhám is fine in the lead, with his mournful face and knack for understated physical comedy. He also played the louche fancy man of Vladimír Menšík’s wife in Happy End, so he obviously has a talent for this kind of role. He also manages to keep us rooting for him even though his character is a total scumbag.

The biggest disappointment performance-wise is Šafránková as his wife. Not that she does anything wrong, it’s just such an underwritten role for someone of her calibre. She deserves better than the stereotypical “long-suffering wife” part that has no room for her abilities. 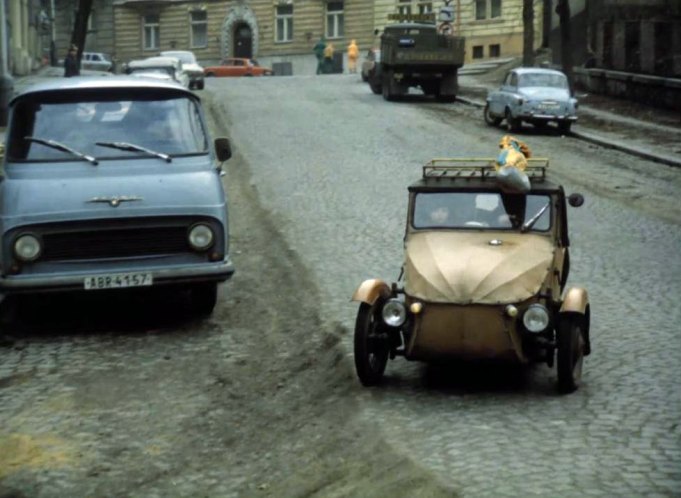 Visually the film is quite interesting. The Communist era was entering its final act in the 80s and everything looks so grimy and tired, from the putty-coloured cars to the drab wintry streets of Prague. Even the high-end restaurants our hero uses for his bigger scores look tawdry and depressing. Life under Communism isn’t a major feature of the film, but it provides a pervasive atmosphere of exhausting oppression.

So I guess I’m going to be the guy who says that Waiter, Scarper! is overrated and not terribly funny. That said, I’m not going to discourage anyone from watching it because it’s an interesting time capsule and worth a spin to see one of the country’s favourite comedy teams in action.

Waiter, Scarper! is showing on Czech Netflix at the time of writing.