Back when I was completely skint (instead of just moderately skint nowadays), bottle returns were a lifesaver just before payday. With a 3kc deposit coming back on every bottle, I could fund another evening’s beer with a moderate stack of empties!

Now, most supermarket chains in the Czech Republic have moved across to automated deposit machines. They lack the personal touch of passing your bottles through a little window to a person standing in the gloom of the stockroom. Some smaller stores still have windows but it is clear that it’s a dying profession.

Zdeněk and Jan Svěrák, the crack father and son team behind popular hits like The Elementary School and Kolya, have often made films touched with nostalgia. They join forces once again for Empties (Vratné lahve), a compassionate comedy-drama about a man who finds a new lease of life when he gets a job working the bottle return window at his local supermarket.

Zdeněk Svěrák plays Josef Tkaloun, a cantankerous Prague school teacher. At the age of sixty-five, he’s starting to feel out of touch with the world around him, and he has trouble containing his anger while dealing with the disrespectful kids in his class. When he takes discipline one step too far – pouring water over the head of one particularly obnoxious student – Josef decides to quit rather than apologise to the snotty little brat.

He’s not quite ready to retire yet, though. Despite his age, he’s still very active, and not content to just dodder around like other retirees he knows. Rattling around his apartment with Eli (Daniela Kolářová), his wife of forty years, presents its own horrors. They still love each other but the spark died long ago, and now they mostly just get on each other’s nerves.

His first attempt to escape the boredom of home life is a job as a courier, but that soon ends in tears. Next up is a position behind the bottle return counter in his local branch of Albert. It’s a rather mundane job but Josef loves it. He enjoys interacting with the customers – especially the female ones – and he gets to play cupid for his colleagues, including Mr Chatter (Pavel Landovský) a monosyllabic old man who served time for trying to kill his wife.

Josef really can’t help himself getting involved with people’s lives. He also tries setting up his school teacher friend Robert (Jirí Machácek) with his prim, lonely daughter Helenka (Tatiana Vilhelmová) who has embraced religion since her divorce. While he is preoccupied with dabbling in other people’s romances, can he also find a way to save his own marriage?

While I have criticised some previous Svěrák-Svěrák joints for being a bit too sentimental, the popular writing-directing-acting duo finds a superb balance here. Empties examines themes of ageing, obsolescence, loneliness, falling out of love, lust, heartache, infidelity and reconciliation with a lightness of touch that keeps it from ever becoming a downer.

Exploring plenty of adult themes – some of which may cause discomfort between couples if they’re on rocky ground themselves – it walks the comedy-drama tightrope expertly. The film is honest without being cruel and, aided by some astutely observed performances by an excellent cast, finds hope without becoming trite or saccharine. 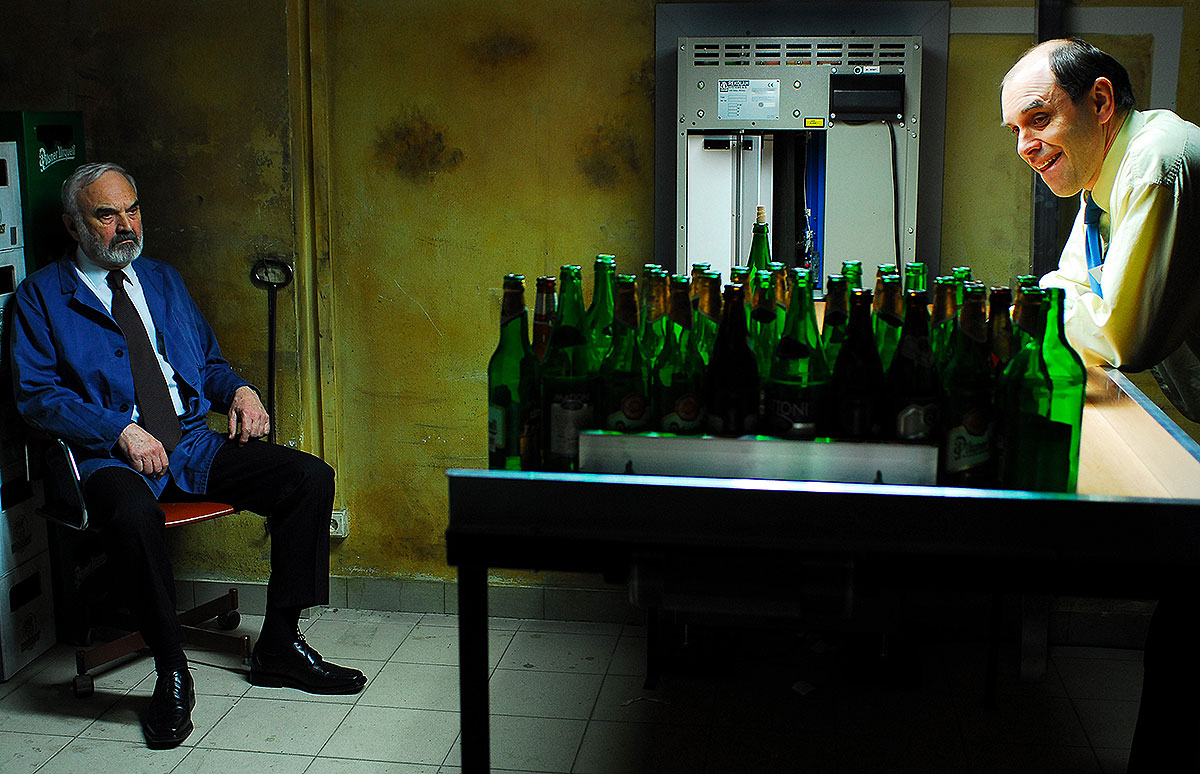 The standout performance is Svěrák Senior as Josef. As with his role in their earlier, far more celebrated effort Kolya, he excels in portraying a character who isn’t always sympathetic but nevertheless making him the compassionate centre of the film. Josef is impatient, petulant, irascible, distracted and a bit of a ladies man – Eli worries that he’s using these new jobs as an excuse to see other women – but he’s still the beating heart of the movie.

He’s an enjoyable character to watch, an eternal skirt chaser with a very active fantasy sex life, and Svěrák Senior (writing the part for himself) is smart enough to cut him down to size frequently. There are some amusing moments when his sexual fantasies are gatecrashed by women he definitely doesn’t want in his highlight reel. On the flip side, there is a touching moment when he realizes that a window of opportunity for a suave older man like himself has only been a window of frustration and regret for one of his colleagues; and a devastatingly honest moment when, in a sexless marriage, he discovers the lack of excitement cuts both ways.

There are a few downsides. The “action” finale involving a hot air balloon, while well staged and beautifully shot, feels a bit tacked on after an hour and a half of quality character drama. It’s a minor quibble though – Empties is highly recommended for a grown-up audience.

Empties is showing on Czech Netflix at the time of writing.