BEC » Blog » Czechmates: A stand-up comedy show about life in the CR

I was born in England, I have lived in the Czech Republic for over 18 years, I am not Czech ‘normal’, nor do I think I ever will be… but I try.

For Czech people, the CR is the ‘normal’. The language and culture belong to them. In other parts of the world, knowledge of the Czech Republic can be quite limited. My English Grandfather thought I lived in Czechoslovakia, many of my British friends talk about Prague as if it’s a country. They have a ‘Non-Czech’ view. Even tourists will struggle to name Miloš Zeman or hum ‘Kde domov můj’. They are right about one thing, though; the beer is great.

As a non-native, and not ‘normal’, I have a very different, eccentric view of the Czech Republic.

I am part of a group of people who are weirdly unique. We visited Czech, we tasted the milk (UHT IN a bag!) and honey (Fermented into Medovina), then we moved here. We are not visitors, we learned stuff, we know things the majority of the world has no idea about.

We know about the horror of socks in sandals, we know about Jagr’s bubble perm and krtek’s trousers with pockets. We remember the time Václav Klaus stole a pen, we know the word defenestration (honestly, no other country in the world knows that word), We know that the ‘Czech it out’ joke is lame but still say it ironically. We’re sad that Karel Gott is dead and Michal David will never ever Stop! We love the erect clock in the centre of Brno and can perform a perfect ‘Czech’ face (even now, under a mask). We know the swear words and snigger when Czechs say ‘Fakt jo’ because it sounds rude. We mangle the Czech language and always struggle to understand the natives. We know about burčák and where to get the best. We live in the paneláks, we listen to our Czech neighbours snoring. We have all lived here way too long and know too much. This is our home now.

And we want to tell you all about it – Czechs and fellow expats both.

We are ‘Comedy Prague’ and we are coming to Brno with our unique view of the ‘Czech Normal’.

An American, a South African, a Mexican, an Englishman and an Irishman walk into Music Lab and talk about the ridiculous and funny side of existing in the CR. We are Sean Ríordáin, Debbie Liebenberg, José Carlos Moreno, Scott Lee Hansen and Luke Ryan. We are Stand up Comics.

Are we (Czech) normal? Probably not.

Where is our home? Right here.

The comedy show was created by Irish comedian, Luke Ryan, who has lived in Prague since 2010. Luke started Comedy Prague in 2013 and it has grown into a vibrant and fun English language comedy scene. The inspiration for Czechmates! came from Luke’s love of living in the CR and seeing how much his fellow comedians also enjoyed living here. The idea is for non-Czech comedians to talk about all the weird and wonderful things about living in this amazing country and hope that Czechs will enjoy our take on their amazing country and that other foreigners will empathise with our experiences. And so far, the show has been absolutely rocking! 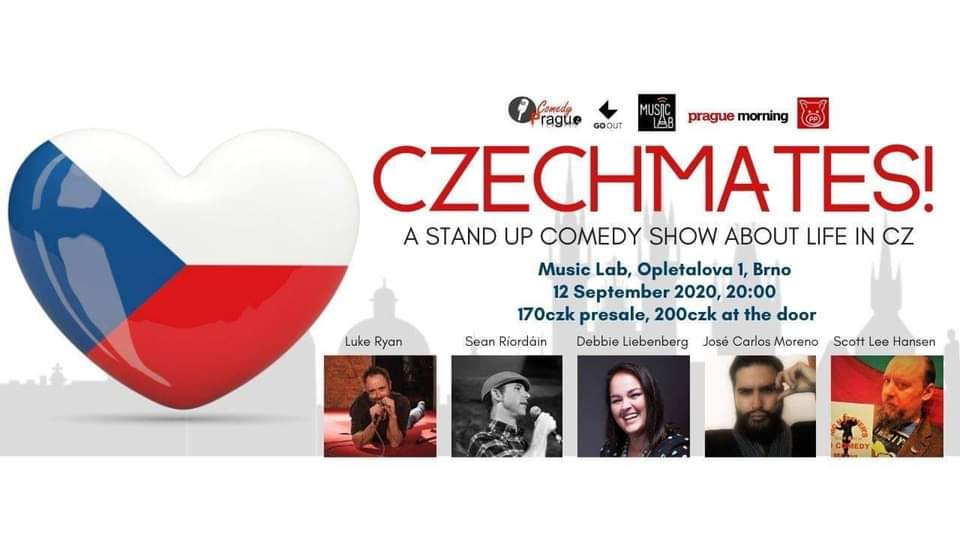