“In Italy for thirty years under the Borgias, they had warfare, terror, murder and bloodshed, but they produced Michelangelo, Leonardo da Vinci and the Renaissance. In Switzerland, they had brotherly love, they had five hundred years of democracy and peace – and what did that produce? The cuckoo clock…” – Harry Lime (Orson Welles) in The Third Man

Troubled times often produce great art. In Seventies America, directors finding freedom after the collapse of the old Hollywood system were able to use the uncertainty and paranoia of the time as muse, producing an incredible sequence of films. These movies captured the sombre tone of the Nixon and late Vietnam era, as well as channelling the psychic fallout from the tumultuous previous decade. They were often cynical, fatalistic, angry, paranoid, usually featuring ambiguous or dislikeable protagonists and open-ended or downbeat conclusions, but they were – and still are – a feast for cinephiles.
Take a look at some of the key films. Unhinged loner Travis Bickle (Taxi Driver, 1976) toys with the idea of assassinating a politician, before shooting up a brothel and becoming a celebrity instead. Bank robber Sonny Wortzik (Dog Day Afternoon, 1975) holds a mini-revolution outside his own bungled heist, evoking the heavy-handed police suppression of a prison riot with his famous chant of “Attica!”. Paranoid, lonely surveillance expert Harry Caul (The Conversation, 1974) bugs a private chat, thinks he’s uncovered a murder plot, and ends up getting bugged himself. Jake Gittes (Chinatown, 1974) uncovers vast corruption and has little choice but to just walk away and forget it. Even the Devil himself got in on the action (The Exorcist, 1973), possessing the body of a young girl in Washington D.C. (Coincidence, given Nixon was still in office at the time?) – two priests ride in to save her and pay with their lives. On and on down the list, the stories are bleak and pessimistic, but the film making brilliant.
Sitting high and proud among the best films of the period is Miloš Forman‘s One Flew Over the Cuckoo’s Nest. Adapted from Ken Kesey’s acclaimed first novel, it is the story of brawling, free-spirited Randle Patrick McMurphy (Jack Nicholson), who gets manages to get himself transferred to a mental institution to avoid hard labour on a prison sentence. Expecting an easier life on the ward, he immediately butts heads with the glacial, formidable Nurse Ratched (Louise Fletcher).

The nurse enjoys total dominion over her patients, controlling them with a blend of passive-aggressive questioning, insinuation, and veiled threats, all delivered with a gentle voice and an icy stare. The men on the ward, too lacking in self-confidence or troubled by their own mental issues to fight back, exist in meek subservience to the nurse. McMurphy sees what is going on immediately, and through his rebellious nature encourages his new friends to stand up for themselves and be more self-confident. However, McMurphy fails to realise what danger acting up against the nurse presents to himself.
First published in 1962, Kesey’s novel prefigured the wave of anti-establishment feeling that would sweep America in the mid-Sixties. By the time a film version finally went into production in 1975, the story of a non-comformist’s struggle against authoritarian leadership would play just as well to a post-Summer of Love, post-Altamont, post-Watergate, post-Vietnam audience.
[movies-box]
One Flew Over the Cuckoo’s Nest is only one of three films to win the “Big Five” Oscars – Best Picture, Director, Actor, Actress and Screenplay (the others were It Happened One Night in 1934 and The Silence of the Lambs in 1991). The story is centered around Nicholson’s gigantic presence, and he’s magnificent – the film came along when Nicholson was at the peak of his abilities, and while the performance shows hints of the over-the-top tendencies that would typify his acting in later years, it suits the role here. He also deserves credit for offering great support to the film’s fantastic ensemble cast – it’s a delight to watch everyone play off him, from Brad Dourif as the shy, stuttering Billy Bibbit to Will Sampson as the towering deaf-mute Chief Bromden, and their reactions to his antics are note perfect.
Forman (born in Czechoslovakia, 1932), whose first American film Taking Off went largely unnoticed, attracted the interest of the film’s producers mainly thanks to The Fireman’s Ball (Hoří, má panenko), his satirical comedy that upset the Czechoslovakian communist party so much it got “banned forever”. Given the allegorical subtext of the source novel Forman was clearly suited to the role, having fallen foul of the communist censors himself and left his home country behind for the States after the Warsaw Pact troops crushed the Prague Spring in 1968. As he wrote in an article for the New York Times in 2012:

Kirk Douglas – who played McMurphy in the Broadway version and owned the rights to the book – sent Forman a letter in the Sixties offering him the chance to direct a film version, but the letter never arrived. Forman’s website suggests the secret police may have had something to do with the missing correspondence.
Forman directs the film with the conviction of a man who feels his destiny depends on it, demonstrating a clear-eyed fervour for the material, guiding the story with a mixture of passion and patience, and allowing the actors plenty of room to breathe. Forman brought an almost documentary feel to the film, shooting in the same mental hospital Kesey had set his novel in, with some of the real residents as extras. He allowed the screenplay’s lengthy dialogue scenes to play out to their fullest with a loose, improvisatory rhythm, sometimes filming without the actor’s knowledge to heighten the realism. 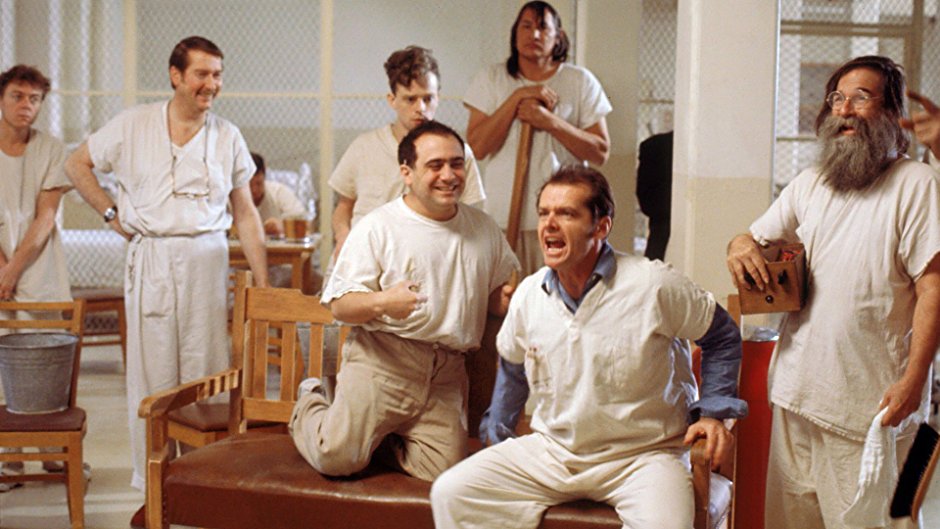 The film disposes with the hallucinatory elements of the book and drops the narration of Chief Bromden, the native American patient who poses as deaf mute to avoid too much trouble with the system. This displeased Kesey so much that he refused to see the film – which is a shame because he missed out on a fantastic movie, and it’s difficult to imagine how his more trippy vision would have played out on screen without looking ridiculous. It certainly would have distracted from the simple power of the story, which concludes both tragically and triumphantly at the same time, and feels fresh and new with each viewing. It’s one of those films where, despite having seen it about twenty times before, I always feel like it might end differently this time.

You can see One Flew Over the Cuckoo’s Nest at Kino Art’s Pop Up screening at the Brněnská káznice (Brno penitentiary) on 9th June.