After the enjoyable but lightweight Obecná škola, I’m pleased to report that the next film on my journey into Czech cinema is the real deal. Pelíšky (Cosy Dens) is an immensely satisfying tragicomedy set in the months preceding the fateful Prague Spring of 1968.

It is a robust family drama featuring some wonderfully poignant comic performances from a formidable cast of Czech and Slovak character actors.

My immediate recommendation comes with a “but” – while Obecná škola is broad enough to appeal to a general audience, your enjoyment of Pelíšky may depend on two things: How well you’re attuned to Czech gallows humour, and at least a basic knowledge of Czech history and culture.

So if you don’t know why someone would have a live fish in their bathtub, or think that Prague Spring sounds like an ideal time to visit the capital, grab a Czech friend before sitting down to watch Pelíšky…

The picture opens in the winter of ’67, and lovelorn teenager Michal  Šebek (Michael Beran) wants to end it all. He is hopelessly in love with his upstairs neighbour Jindřiška (Kristýna Nováková). The trouble is, she is going out with his much cooler mate Elien (Ondřej Brousek), who gets all the latest movies, music and fashion from his parents living in the States.

To make matters worse, her father, Mr Kraus (Jiří Kodet) is a rabid anticommunist and war hero, and often has flaming rows with Michal’s own father. Mr Šebek (Miroslav Donutil) is a staunch supporter of the Communist government, an army officer so petty and regimented that he types out a weekly menu for his family.

Added to this sitcom-style setup is Michal’s sad, single aunt who is looking for a new father for her boy, and his vaguely sleazy uncle Václav (Bolek Polívka) who visits for Christmas.

The first hour of the film focusses on each family’s fraught Christmas celebrations, and establishes the tense dynamic between the generations. Mr Kraus and Mr Šebek are strict fathers, and have trouble showing affection to their children, while Michal and Jindřiška regard their dads as tyrants.

The death of a character half way through leads to the two families becoming one, and the two ideologically opposed fathers must find a way to tolerate one another for the sake of their relatives.

This might sound a bit heavy, but director Jan Hřebejk handles the material with an authority and lightness of touch, ably assisted by his magnificent cast. The true strength of Pelíšky is how his actors portray initially dislikeable characters with such comic gusto and pathos, staying just the right side of caricature.

While the whole cast is excellent, Pelíšky is all about the two belligerent father figures. It helps that Kodet and Donutil are so distinctive physically – I could imagine these men illustrated by Josef Lada.

Kodet as Mr Kraus is thin, stiff and ageing, a proud patriot who could shout for Czechoslovakia – in one of the film’s key comic moments, he is provoked by his daughter into a lengthy rant about the difference between Czech knedlíky and Italian gnocchi. In the second half, he becomes a far more noble, weary and ultimately tragic character. 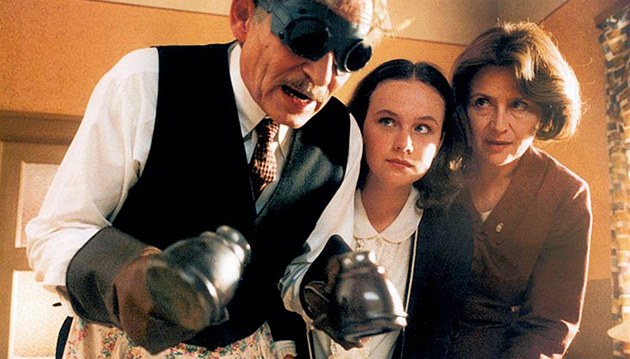 Donutil as Mr Šebek is a good match for Kodet physically. So often comic partnerships depend on a contrast between fat and skinny, and the imposing but overweight Šebek is a pathetic character, a man clinging to his political beliefs to counteract his growing impotence in his family life.

The contradiction between the two patriarchs is key – in a global sense, the conflict between Communism and Capitalism was the ultimate fat man/skinny man double act. The East and the West spent fifty years poking each other in the eye, and when both could see again, there was a different villain tying the girl to the railway tracks.
If Pelíšky has a fault, it is that the plot is a little too convenient. It seems like a character dies purely in order to bring the two families together, and I found it difficult to believe that Kraus and Šebek would be caught completely unawares by the invasion of the Warsaw Pact troops at the film’s conclusion.

In that sense, Pelíšky is very contrived – most of the drama is confined to the family’s apartment building, without any clues as to what is happening in the capital. Wouldn’t two men as politically aware as the two fathers be glued to the radio as events unfolded in Prague?

Those small gripes aside, Pelíšky is a superb film, rich with memorable characters, and loaded with delightful period detail. The film looks gorgeous, awash with the styles and sounds of 60s Czechoslovakia, from Karel Gott’s latest hit to an instrumentalised version of Blue Effect’s Slunečný hrob, which recurs as the film’s theme tune.

By the end of the film, I felt like I genuinely knew these people. Despite their faults, I also loved them, which made the  conclusion so heartbreaking.

The DVD Pelíšky with English subtitles can be obtained online and at news stands.