I grew up on old monster movies, mainly atom era creature features and sci-fi stuff from the ’50s and ’60s. You had invaders from Mars or emissaries from further afield, who brought with them stark warnings and huge silver robots for muscle. There were mutants, blobs, bug-eyed monsters, giant ants and spiders, and fish-men with a thing for bathing beauties. There were plenty of mad scientists, insane experiments, fiendish plans, men with x-ray eyes, and robots with heads like jukeboxes. Then there were the titles, which struck right to the core of a five-year-old boy’s imagination – When Worlds Collide, It Came From Outer Space, This Island Earth, Forbidden Planet.

My favourites were always the movies where a monster went on a rampage through a city. I could never get enough of seeing the creature crashing through buildings and stomping on fleeing citizens. I never wanted it to stop, and cried when the monster died at the end. Even at an early age I saw that one person’s work stood out as superior to all the rest, and he created many of the best examples: the giant reptile that descends on New York in The Beast from 20,000 Fathoms (the inspiration for Godzilla); the vast octopus that takes down the Golden Gate Bridge in It Came from Beneath the Sea; the wonderfully expressive alien creature on the loose in Rome in 20 Million Miles to Earth; and my favourite, the angry Tyrannosaurus in The Valley of Gwangi, surely the best cowboy vs dinosaur movie ever made. That person was stop-motion effects maestro Ray Harryhausen.

Harryhausen’s creatures had such a profound effect on me as a kid that I even had recurring nightmares about them. I’d be chased around my neighbourhood by a Tyrannosaurus just like the one on Gwangi, and each time I found a decent hiding place my sister would come along and tell it where I was cowering. This was pre-Jurassic Park, so my brain lovingly rendered this creature in Harryhausen-esque stop motion.

Harryhausen’s last full feature film, Clash of the Titans, is showing at Kino Art on the 19th of December. I saw it the last time they screened it, and it’s great fun to see those glorious creations up on the big screen.

When it was released in 1981 it felt like a bit of a throwback, as the stop-motion techniques that Harryhausen had worked with and developed since he first saw King Kong back in the ’30s were showing their age. While still packing plenty of charm, Harryhausen’s monsters looked a little homespun compared to the stuff that was coming out of Industrial Light & Magic, the visual effects company George Lucas founded in preparation for Star Wars. When you consider that The Empire Strikes Back came out around a year earlier and Raiders of the Lost Ark hit the cinemas the same day, Clash of the Titans feels like a museum piece. Stop motion was still regularly used throughout the ’80s, but the first fully computer-generated character – the Stained Glass Knight in Young Sherlock Holmes – was only a few years away, and CGI would eventually render stop-motion effects in blockbuster movies obsolete. 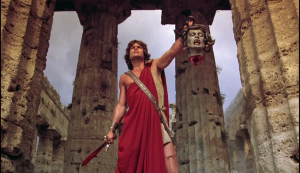 Clash of the Titans is a swords and sandals epic in the vein of Jason and the Argonauts, perhaps Harryhausen’s most fondly remembered picture. We head back to ancient Greece and Mount Olympus, where we meet some heavyweight thespians – and Ursula Andress – standing around in white robes waiting for their paycheques. There is some office politics between Zeus (Laurence Olivier) and Thetis (Maggie Smith), which results in Thetis spitefully plucking Zeus’s mortal son Perseus (Harry Hamlin) from his blissful existence and depositing him in the far-flung city of Joppa.
There he runs into Mickey from the Rocky movies (Burgess Meredith), who sees another winner in the raw young contender and helps him on his quest. Dad Zeus helpfully provides his boy with some nifty armour – a shield, a sword that can cut through marble with a flick of the wrist, and a helmet that renders the wearer invisible. Checking out his new invisibility skills, he heads into downtown Joppa to see the sights and hears of the beautiful princess Andromeda (Judi Bowker). She’s a tough girl to date though because any potential suitor must answer a riddle – and if he gets it wrong, he gets burned at the stake.

Perseus’ pursuit of Andromeda leads him through the usual trials for this kind of movie – capture a flying horse, defeat hideous monsters, collect the head of Medusa, and get back in time to rescue Andromeda from the mighty Kraken before it eats her alive.

As a last hurrah for Harryhausen, Clash of the Titans is a mixed bag. It takes a while to get moving, hindered by the generally wooden performances. Only Meredith really seems to loosen up and have fun with it. Smith, Olivier, Andress and Claire Bloom all seem a little self-conscious, as if they feel the film’s beneath them, and the script gives them little else to do but bicker and scowl at each other anyway. Harry Hamlin looks the part as Perseus, but perhaps the best you can say about his performance is that he looks great in a toga and has magnificent hair. Bowker as Andromeda is equally vacant.

None of that really matters, because there’s a whole bunch of Ray Harryhausen monsters to enjoy which completely outshine all the human performers onscreen. There’s a beautiful Pegasus, a giant vulture, a two-headed guard dog, and a mighty Kraken. Obviously inspired by the Star Wars movies, there is also a clumsy R2-D2-like sidekick, a clockwork owl called Bubo. Then there is Medusa… 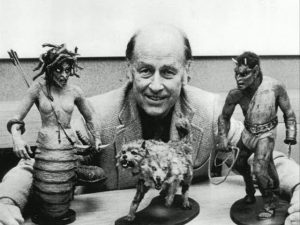 Along with the skeleton army in Jason and the Argonauts and the six-armed statue of Kali in The Golden Voyage of Sinbad, Medusa is one of Harryhausen’s finest creations, and the showdown between her and Perseus is easily the most suspenseful and scary set piece in any of his films. Half woman and half rattlesnake, she stalks Perseus and his crew through her shadowy lair, almost as lethal with her bow as she is with her petrifying stare.

If you loved this kind of films on TV as a kid, you should seize the opportunity to see one in the cinema. If you’ve got your own children now, this might be the perfect opportunity to introduce them to the magic of old school special effects. Clash of the Titans feels a bit creaky these days, but those stop motion creatures still have the power to inspire awe and wonder in the way CGI almost never does.