One half-liter of Starobrno beer has just under 200 kcal. A normal-sized man should consume around 2,700 kcal a day and a normal-sized woman should take in about 2,200 kcal to stay at the same weight.

In a beer-drinking country like the Czech Republic, those beers add up quickly because, as everyone knows, “Let’s get a beer” is, at best, a willful misuse of the numeric function of the indefinite article or, at worst, subconscious denial: it’s never one beer, and it’s often five or six.

You do the math, and don’t forget that food counts, too. Or just look in the mirror.

I did. I didn’t like what I saw. So, this year I forced myself to finally follow through with a New Year’s Resolution: lose one kilogram a month for the entire year. It is an audacious goal, but, so far, I am on target.

Luckily, my preferred form of exercise – running – has been growing quickly in popularity here in Brno, and its new omnipresence has kept me focused. This is a fantastic city with many places to run: Lužánky; Kraví hora; Wilsonův les; Palackého vrch; Brno Lake; along the Svratka bike path from the lake to Olympia Shopping Center; along the bike path from Maloměřice to Bílovice; through Mariánské údolí. There are at least two races every month and several clubs have regular training throughout the year.

I pass dozens of runners during my 5 km training runs along the Svratka in Horní Heršpice/Komárov regardless the day or time.

Once, in January, I was out the door at 5 a.m. There was a light sprinkling of snow on the ground and it was quiet and peaceful. I felt like I was in my own private world, where I was working to make myself better and everyone else was asleep. It was a powerful feeling that propelled me through the cold. Then, out of nowhere, some dude blew past me – completely ruining my personal Nike commercial.

When I first arrived in the Czech Republic nine years ago, I rarely saw runners. I was training to run the New York Marathon for the second year in a row. I even had the return plane ticket. Unfortunately, a spring month in Prague, the many televised games of the 2006 World Cup, and three consecutive 10-day summer camps led to a large count of beers that deadened my discipline.

Come September, I was two months and hundreds of training kilometers away from surviving a 42.19 km race. Nevertheless, I always mentioned running as a hobby and when I (perhaps, immodestly) dropped the fact that I had run the 2005 New York Marathon, I enjoyed the response, even though I am not, and never was, anywhere near a competitive runner.

Now, the Prague Marathon has become a huge, televised event and there is a series of half marathons around the country. The Brno Half Marathon ballooned in size this year. Everyone, it seems, is now a runner. 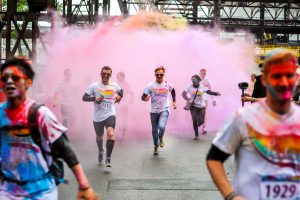 This is not to say that this area did not already have a running culture. Běh Lužánkami, for example, will be run for the 71st time on March 19, 2016. The first year I ran Lužánkami, in 2008, the main 8 km race had only one heat of 60 runners, no T-shirt, and you signed up the day of the race at a fraction of what it costs today. (For comparison, there were 495 runners in two heats in 2015.) Brněnský běžecký pohár, a 10-part winter series of races, regularly gets at least 100 people despite ice, snow, and freezing wind.

One of the most famous runners in history — Emil Zátopek – is from Moravia. Zátopek won gold medals at the 1952 Helsinki Summer Olympics in the 5,000 meters, the 10,000 meters, and the marathon. He set records in each event. The marathon was his first, and a last-minute decision at that. According to “Born to Run”, a popular book by Christopher McDougall that has been passed around the local running community, Zátopek had insane workouts. He was undeterred by the weather, lack of proper footwear, and pain; he simply ran repeated fast intervals without much rest or recuperation. People thought he was crazy, but two years ago Runners World named Zátopek the Greatest Runner of All Time.

Of course, running is only my preferred form of exercise. Others battle those 200-kcal beers and/or chocolate bars in their own ways: in-line skating, rock climbing, squash, badminton, orienteering competitions, beach volleyball, aerobics, yoga. You can find pretty much any sport and activity in Brno (check out the BEC leisure activities guide). Fitness centers have boomed during the past decade. The surroundings of Brno offer many interesting biking trips in each direction. And Spartan races – which require running and clearing obstacles — are also becoming popular; the next is in Kouty on October 10.

Locally, the upcoming months are full of opportunities to run or just watch. If you are not in shape, start training for next year because there are a slew of races in the spring and summer – not to mention many outside of Brno – to use as motivational goals.

Here are some running events, held in Brno annually

Brno Schody AŽ nahoru (Stairs to the Top) – held in May

Hope to see you at one of these races. We can get a reward beer afterward.